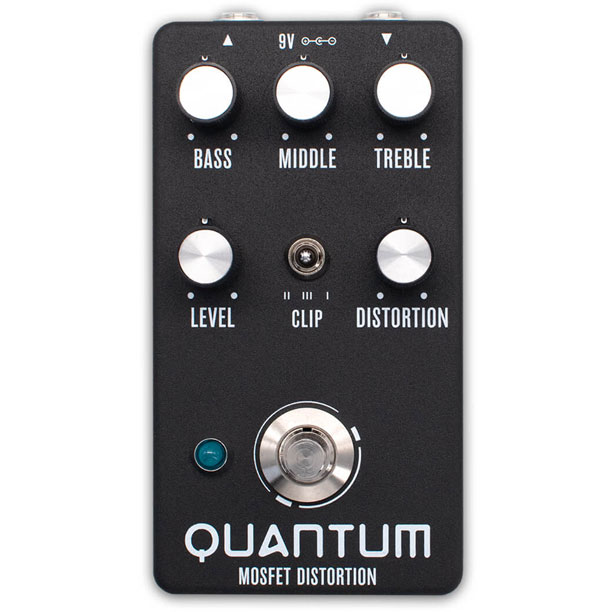 Based in Des Moines, Iowa, Aion FX is a company that’s taking the pedal kit format to the next level through cool, PCB-based circuits and a pedal line with a sober yet stylish look.

The Quantum Mosfet Distortion is probably the crown jewel of the new line of kits they just announced, comprising six sophisticated designs covering all the basics of gain, dynamics and tone sculpting.

The Quantum is a low-to-mid-gain mosfet overdrive/distortion with 3-band EQ based on the rare Ibanez MT-10 Mostortion, a pedal adored by tone connoisseurs. A 3-way switch not present in the original gives you three clipping diode voicings.

It is possible to purchase the complete kit or the PCB only for a fraction of the cost and a more personal approach.

Noteworthy is also the attention to details they put in describing the circuit’s origins and the possible mods, with a chapter called “Circuit Analysis” that is bound to excite the nerdiest pedal lovers. The one for the Quantum starts like this:

And if you are wondering how the Aion FX Quantum sounds, here’s a video for you!

The Quantum MOSFET Distortion project is a clone of the Ibanez MT-10 Mostortion MOS-FET Distortion, a fairly obscure pedal in the Ibanez “10 series” released in 1990 and discontinued in 1993.

It’s unique in that it’s the only Ibanez pedal with a 3-band tonestack, which was uncommon up until the 2010’s when you started to see amp-like pedals from companies like Wampler. Before then, the Marshall Shredmaster and Guv’nor (Drivemaster) were two well-known examples, but there aren’t many others.

Along with the Guv’nor and Shredmaster, this is one of the first pedals to use a full 3-band tonestack, and the only one in Ibanez’s history.