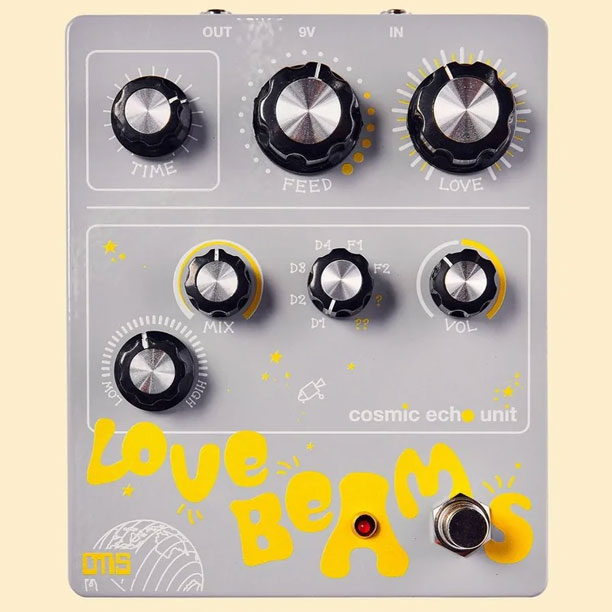 Hailing from a small builder based in Mittagong, Australia, the Otis Audio Love Beams Cosmic Echo Unit is a quirky and super-creative take on the multi-mode pedal, offering four delay modes, two filter modes, and two “?” modes – which are mostly reverb-based.

The pedal controls are divided in three section: the Time knob on the top left controls the length of the repeats or, if the effect mode is in a reverb mode, the length of the reverb. The four knobs at the bottom (Tone, Mix, Mode and Volume) are fixed controls doing what’s expected of them. The two bigger knobs on the top of the pedal (Feed and Love) tweak variable functions depending on the selected mode.

None of the modes is particularly straightforward (hence our use of the word “quirky” in the intro); let’s have a quick look at what they do:

D1, named Lightwaves mode is a modulated bandpass filter feeding a delay with an overdriven chorus in the feedback path.

D2 is Life Speed mode, a low pass filter modulated by a sample-and-hold control signal, feeding a delay with amplitude modulation in the feedback path. It can bend and shift the repeats into complex textures or rhythmic echoes.

D3, aka Subterranean mode, is a delay going into an envelope-controlled filter with a blendable octave fuzz in the feedback path.

D4, the Sound + Vision mode, is another delay, this time featuring cascading, pitch-shifted repeats that can be filtered.

F1, or Honey mode, is not a delay but a low pass filter with modulation of both the cutoff frequency and a blendable chorusing effect.

F2, aka Patchwork mode, is a low pass filter with blendable fuzz and a square tremolo effect.

? is Reshape mode, a resonant, plate-like reverb into a filtered delay line.

?? is Creation Rebel mode is a resonant, spring-like reverb with a classic 4-stage phaser in the output path.

Needless to say, this is a device that’s not for everyone, but creative/psych guitarists will most likely be entertained and inspired by it for a long time. We added it to our article about the best experimental delay pedals and to our category of creative guitar pedals.

Love Beams is a multi-mode delay, filter and reverb pedal – often it’s a combination of two of these functions, sometimes it’s a standalone filter, other times it’s all 3 in 1. It just depends what mode you’re in. We refer to it as our Cosmic Echo Unit because we believe it sounds unlike any other delay on Earth. Inspired by the pioneering musical effects of the 1970s and 80s – large boxes with shiny knobs that made manipulating audio into desirable, sonic-mutations easy and pleasurable – but brought forward into the modern age. Love Beams is intended to be a tactile, tone-shaping unit that may inspire new directions in sound and music. See below for a quick overview of all 8 modes, head to our demo page for a fun exploration of these modes or feel free to consult the manual for a more in-depth look.

A uniquely modulated band pass filter, into a delay with an overdriven chorus in the feedback path that goes from a subtle radiance to deep, swelling pulsations.

A low pass filter modulated by a sample and hold control signal, into a delay with amplitude modulation in the feedback path. Capable of bending and shifting the repeats into anything from rich textures to hypnotic rhythmic echoes.

A delay into an envelope-controlled filter with a blendable octave fuzz in the feedback path. Creating trippy, accented repeats, with higher frequencies spiking then decaying rapidly.

A delay with cascading, pitch-shifted repeats. Depending on the ctrls, the repeats are uniquely filtered to allow for everything from subtle harmonic overtones, to kaleidoscopic, mutant echoes.

A low pass filter with the option for light to heavy modulation of both the cutoff frequency and a blendable chorusing effect. Capable of subtle pulses, swelling ambiance or transparent radiation.

A resonant, plate-like reverb into a filtered delay line. Plays with the fabric of time in a very pleasant way.

Made on Gundungurra country in Mittagong, NSW, Australia – Which always was and always will be Aboriginal land.