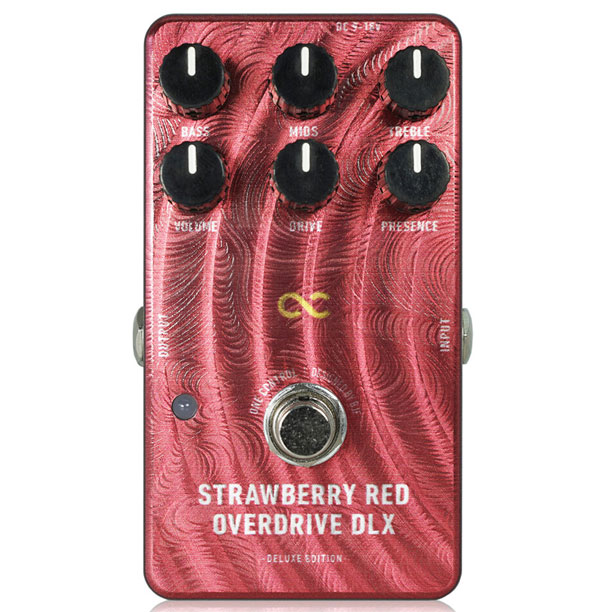 The One Control Strawberry Red Overdrive DLX (as in Deluxe) is an upgrade to one of the Japanese company’s most popular overdrive pedals. Part of the BJFE series designed by Bjorn Juhl, the SRODDLX retains the versatile tone of the Mini Strawberry Red but makes it even more so by adding three extra knobs delivering more control and an expanded sonic palette.

If the original only had knobs for Volume, Drive, and Treble, the DLX version adds controls for Bass, Mids and Presence, for a full-fledge tone-sculpting EQ section.

While it’s not a clone of an existing circuit, this pedal recreates the sound of high-end amplifiers, their pleasing compression and EQ character that enhance the performance’s dynamic without depriving it of its nuances.

This is a pedal that can be used for a variety of sounds, including clean booth, low gain or high gain overdrive tones, thanks to its copious amount of volume on tap.

This new DLX six knob model gives you more control over your tones with finely tuned precision. The SRODDLX still retains the classic original circuit developed by Björn Juhl and One Control with an overdrive that transcends style and genre. To be able to interface with a wide variety of amplifiers and speakers, the DLX has a classic four knob tone circuit “stack” like many classic UK amplifiers – BASS, MIDDLE, TREBLE, and PRESENCE. With a single knob, this circuit can produce overdrive ranging from low bluesy tones to a hard and powerful overdrive as well as heavier distortions at the far-right side of the dial. With the DRIVE set to minimum, the SRODDLX can be used as a clean or treble booster style pedal. When the DRIVE knob is raised a bit more and the guitar volume knob lowered, the resulting clean sound can be rich with overtones and a thick responsive tone can be had, resembling older one knob tube amps. With the gain levels set higher, the SRODDLX still retains the characteristics of various guitars and amplifiers, never losing your core tone.

For many of us, the STRAWBERRY RED OVDERDRIVE has been a favorite pedal for years.

Now we have it available in this six-knob dynamic and toneful version with standard and limited edition “Japonism” artwork.

TREBLE: Adjusts the overdrive tone centering on the high range. A shelving EQ of + 6dB @ 2KHz centered on 1kHz. The slope is from 700Kz to 6dB.

PRESENCE: Adjusts the level of 4-7kHz.

* The LED turns off when the battery needs to be replaced. When driven by batteries, the INPUT terminal doubles as a power switch. When the main unit has batteries, unplug it from the input while using it.

STRAWBERRY RED OVERDRIVE DLX is SROD’s philosophy of being able to push any amp and speaker combination, from low gain to medium gain overdrive, distortion, and even more distorted amps and other distortion pedals with any pickup. It was further strengthened. It’s a muscle overdrive, but at the same time it can produce old sounds, and it’s really versatile.