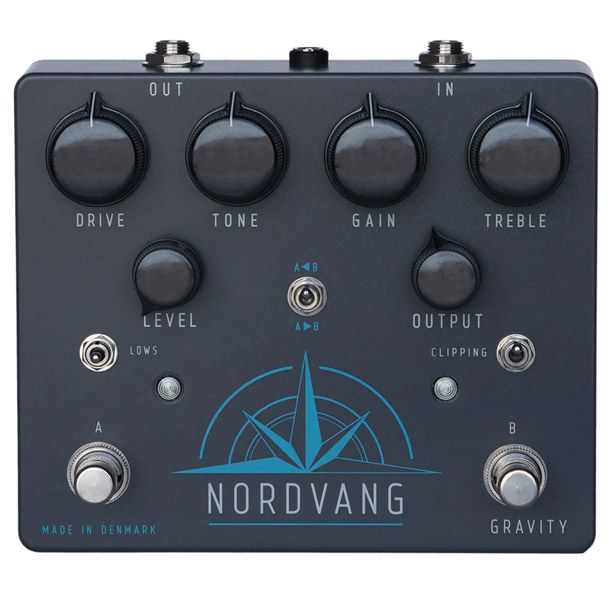 Nordvang is a Danish pedal company that launched in 2020 and quickly turned ears with a series of dual-channel pedals featuring two different flavors of overdrive each. The Gravity Drive (whose name is inspired by John Mayer’s namesake song) offers a Tube Screamer-style circuit on side A (left side) and a Centaur Klon clone on side B (right side), each with its own footswitch, Gain, Tone/Treble and Output/Volume knob. A toggle switch allows you to reverse the routing order, and they stack when both on.

A few more controls – external and under the hood – allow to further expand this device’s sonic palette.

The Lows switch changes the bass response of the Tube Screamer side. Internally you find four sets of dip switches (gain, soft clipping, symmetrical/asymmetrical clipping, hard clipping) that further enable you to tweak this side of the pedal. The Clipping switch, on the other hand, toggles between a pair of germanium or schottky clipping diodes.

Also, the newly released V2 allows for next-level routing by splitting the two channels into separate effects through 1/4″ jacks which are actually able to act as in and out using a TRS to 2 x TS – 1/4 ” jack cables.

These pedals are getting a good response and the first batch is already sold out. We added the Wingman to our in depth article about the Best Klon Centaur Clones.

**The Gravity v2.0 update**
Gravity is our take on two all-time favorite overdrive circuits, the K-style circuit and a TS10 circuit all in one enclosure! A new dual overdrive specializing in mid push, Gravity will give you the ability to cut through the mix in any situation.
Our inspiration for this pedal lies in its name, Gravity and also by the later live lead tones of John Mayer. In particular the outro solo tone in his song “Gravity”, and intro in his song “Belief”, where he stacks these two pedals to obtain that signature tone with a thick wall of mids. The TS10 is often used as the main lead tone and the K-overdrive is added as a second cascading gain stage, either as a pre drive into the TS10, or as a post drive.

We have recreated the circuits in each pedal staying true to the original, but added switching options for additional tone shaping.  We have kept both buffers that were used in the original designs in order to replicate the exact interaction between the two circuits.  The Gravity overdrive is divided into a side A (left) and a side B (right), separated by the order toggle switch in the middle which is used to flip the internal order of the effects and hence the signal path from guitar to amp.

Side A features the TS10 circuit with external knobs for DRIVE, TONE, LEVEL and a three position toggle switch labeled LOWS. The lows switch changes the bass response of the circuit. Internally you find three dip switches (clipping, clarity and brightness) that further enables you to tweak your tone.

The side B features the K-circuit with external knobs for GAIN, TREBLE, OUTPUT and a two position toggle switch labeled CLIPPING. The clipping switch toggles between a pair of germanium or schottky clipping diodes.

Both sides can be used separately or stacked.

TRS split: Besides using the two sides of Gravity in serial mode, either A->B or A<-B, the Gravity V2 can split side A & B into separate effects. The two 1/4″ jacks, which in serial mode are used for signal in and out, will in split mode serve as IN+OUT for each side.

– Replica of the TS10 audio circuit including the three transistor buffer circuit.

The max power consumption of the Gravity is 100mA (+9VDC). If operated with a power supply with insufficient current

capabilities, it will affect the performance. So make sure your +9V-DC power supply is capable of delivering 100mA.

We recommend you to use a quality power supply with isolated outputs. The Gravity does not support battery operation.