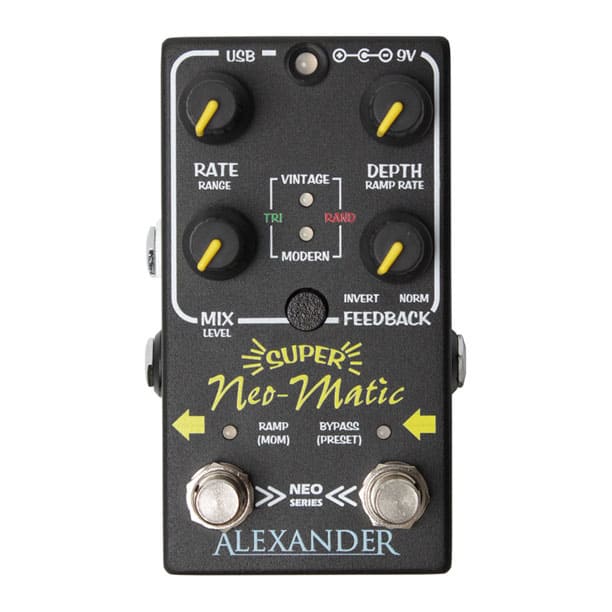 The Pefftronics Super Rand-O-Matic is a rather unique and semi-obscure pedal that appeared in the early ’90s. It used a hybrid analog/digital circuit to produce a very particular modulation sound, described by some as “flange, chorus, doubling, and slapback plus alien blips and even the sound of a Huey chopper.” Fitting with its name, the Rand-O-Matic special “something” was the possibility to add a Random modulation element that created unpredictable detuning with results from the subtle to the “alienating.”

North Carolina’s Alexander Pedals‘ new Super Neo-Matic is a recreation of this effect, with all the added functionality allowed by the current technology, which – in Alexander Pedal’s world – is implied by the word “Neo,” which is applied to all the latest Alexander devices that include features like Midi compatibility, USB port, Ramp footswitch, presets, etc.

Although the graphics are almost identical to the original, the controls’ layout, with two fewer knobs, is somewhat different, but the Super Neo-Matic features a lot of extra functions through the classic Neo “alt button” opening up secondary functions for all the knobs, including Ramp Footswitch for on the fly effects, Presets, and an Invert/Normal knob function that we are looking forward to exploring.

Check out the intriguing sounds generated by the Alexander Pedals Super Neo-Matic it in the videos below.

It was the best of times, it was the worst of times. Back in the go-go ‘90s, a band of mad scientists emerged from a lab in the wilds of Iowa with a strange pedal that altered the very fabric of time and space. This pedal found its way into the hearts and minds of a select few – the dreamers and the music makers, the wild and free.

But those pedals weren’t made to last. As the years have passed, their fragile circuitry has begun to fail, until one day they will be only a memory. Wise grandfathers will tell the children tales of the strange black pedal from the west, and that will be the end of the story.

Alexander Pedals designer Matthew Farrow decided to recreate the magic using modern DSP technology and high-quality construction techniques. All the strange sounds of the original lurk within the Super Neo-Matic, along with some fun new surprises. The original pedals may be slowly fading, but your journey has just begun.