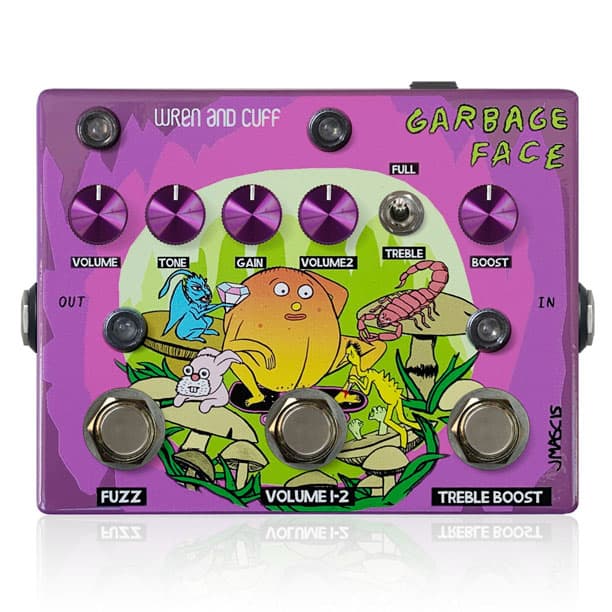 We somehow missed the CME presentation video of this Wren and Cuff muff-style fuzz earlier this year, a pedal developed during a two-year collaboration with legendary Dinosaur Jr. guitarist J. Mascis.

The Garbage Face features, in one peda,l the guitarist’s favorite gain chain with a Rangemaster-style trebly boost (which can also be set flat via tottle switch) followed by the emulation of Mascis’ Ram’s Head Big Muff, a unit from the ’80s which encapsulates his signature tone and that was painstakingly analyzed and modeled by the pedal company.

In between the boost and the fuzz’s footswitches, there’s an extra Vollume 1-2 footswitch that alternates between two volume levels, tied to the Volume 2 knob.

Here are the videos of the Wren and Cuff Garbage Face.

Bonafide guitar legend by any standard, his band Dinosaur Jr. toured with and influenced many of the bands that defined the 90’s — bands like Nirvana, Sonic Youth, Mudhoney, and too many others to count. Ask nearly any punk or grunge band from that era (and of today) if they’ve heard of J Mascis, and you’ll get a look like you’re a fool for even having to ask.

His association with the Big Muff is well documented as one of the main building blocks of the Dinosaur Jr. sound. So, it is understandable that the Muff experts at Wren and Cuff would be the ones calling when the idea for a signature pedal came about. After more than 2 years in the making, that pedal is finally here.

A part-by-part recreation of J’s number one Muff since 1987, this is not just any 70’s EHX Ram’s Head. J’s pedal is an odd bird with parts values that are “incorrect” and component values that have drifted far from their original values during its near-50 year journey.
On the other side of the pedal is a replication of J’s favorite germanium treble booster that he uses to slam the input of said muffer. And nestled in between the two is a wonderfully simple but incredibly useful tool… a second volume knob with a footswitch to let you bounce between two Muff volume outputs!

We know you’ll love this collaboration with one of the best masters of fuzz that has ever lived.