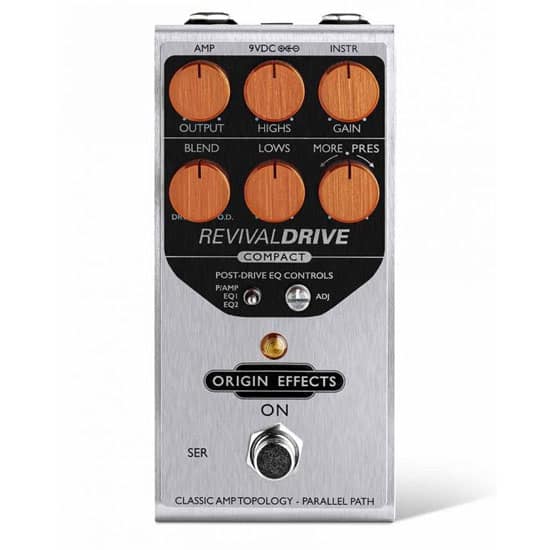 California’s Origin Effects, makers of the most beastly overdrive to ever walk the face of the earth (the RevivalDrive) had the sensible idea of creating a more contained version of that 12-knob “monster.”

Enter the RevivalDrive Compact. About one third the size of its non-compact brother, and sporting only one channel rather than two, this stompbox features an analog signal path based on discrete transistor with a more streamlined set of controls to dial in a variety of realistic amp-style tones.

By adjusting things like preamp voicing, break-up characteristics and low-frequency distortion, you can get straight to the key factors that govern great amp tone.

The circuit’s Post-Drive EQ features a proprietary filter and allows you to adapt the driven output to any amps, while the Blend knob lets you bring back some of the clean tone, adding flexibility and body.

Here are the first videos of it.

With a built-in blend control to mix your clean and overdriven signals and a powerful Post-Drive EQ that shapes the pedal’s output to suit the amp you’re using, this is one compact pedal that leaves all other amp-in-a-box effects in its shadow.

Inside the RevivalDRIVE Compact, we’ve recreated every stage of a valve amp’s signal path using all-analogue components, with discrete transistor-based circuitry standing in for the valves themselves.

The pedal’s simplified controls directly shape key properties of this simulated amp circuit. By adjusting things like preamp voicing, break-up characteristics and low-frequency distortion, you can get straight to the key factors that govern great amp tone.

In the designing the RevivalDRIVE Compact, we worked hard to distil the complex functionality of the original pedal into an intuitive set of controls while still retaining as much range as possible.

The brand-new Highs control takes the original pedal’s three distinct preamp voicing modes and maps them onto a single, continuous knob that offers a wealth of new in-between settings.

We also redesigned the Blend knob to simultaneously back off the gain as you mix in your clean tone, ensuring pleasing, musical resultsthroughout the control’s travel.

While most overdrives will work well with some amps and less well with others, the RevivalDRIVE Compact’s built-in Post-Drive EQ lets you tailor the output of the pedal to work with just about any amp, as well as flat-response power amps, mixers and recording interfaces.

The Post-Drive EQ means you don’t have to compromise your preferred clean settings just because your overdrive sounds too harsh or too woolly. Simply set your amp how you like it, then adjust the RevivalDRIVE Compact’s proprietary EQ filter until it sounds right.

To achieve this, we opted for a single channel in place of the original’s separate Valve and Silicon Rectifier channels, with newly designed rectifier circuitry voiced midway between a solid-state rectifier and a GZ34 rectifier valve. We also decided to leave out additional features like the switchable mid-range boost and the Ghost control, which uses significant extra circuitry (including a simulated mains power supply) to recreate the “ghost note” effect produced when cranking certain vintage amps.

If you want these extra features, switchable channels and more detailed control over things like dry signal level and output EQ, then the RevivalDRIVE is the one for you, with the option of the Custom front-panel EQ for precision tone-matching when running into more obscure amps.

But if you just want to get to the same unparalleled overdrive sounds, and you want to get there fast, that’s exactly what we built the RevivalDRIVE Compact to do!