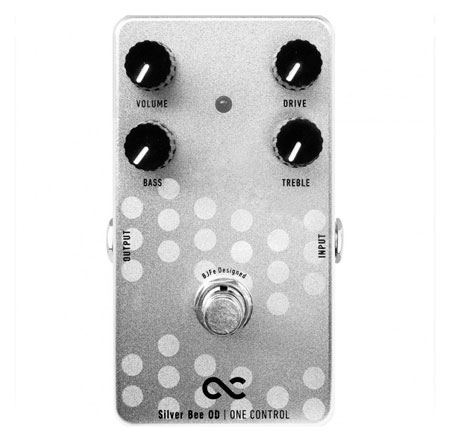 Straight from the mind of the pedal whisperer Bjorn Juhl, comes the Silver Bee OD from Japan’s One Control. Bjorn has taken the reins of the popular Honey Bee OD and sculpted it into a highly-expressive rock machine.

The Silver Bee OD has a retooled version of the Honey Bee’s drive engine, giving you sounds reminiscent of classic American “silvery” combo amps, the kind of gear that had a helping hand in crafting some of the world’s finest rock records.

Because of the “silvery” sonic attributes, it’s engineered for an era of rock that’s a touch more modern than the raging stacks of the late ’60s, back when rock music took on a decidedly more modern sound with the tones and amp profiles to match. You can catch this silvery beast at this year’s NAMM show. – Nicholas Kula

One Control BJFe Series Silver Bee OD is a version customized with the hands of BJF himself based on legendary amp like pedal, Honey Bee OD.

Honey Bee The height of the response that can be easily adjusted from the clean to the overdrive with the touch of the hand which is also the feature of the OD, as it is like a classic combo amp exists in front of you as a tone with a sense of security, It also realized a brighter tone.

The flat low end and the tone produced by the sharply tightened top end make me think of the characteristics of American combo amp.

Despite the fact that there is a strong presence, it is a gorgeous tone that goes sharply forward. That tone feels even nobility has a flexibility that can be used always on by lowering the gain.

With the same gain range as Honey Bee OD, with the best tone for even more modern rock, even a single coil or humbucker, I will make a tone of a larger modern to reissue American amp.

The 2-band equalizer installed in Silver Bee OD is widely controllable, allowing you to freely control the balance of sounds.

The TREBLE knob can also control the brightness of the tone, the high-frequency component, the harmonic content, and make a drive tone with a metallic beautiful sound.

The BASS knob is centered on the low mid, you can adjust the tone according to the characteristics of the stage, the connected amplifier, and the guitar.

While high-response overdrive may sometimes be difficult to use, Silver Bee OD has a solid presence in the sound itself, so it creates a sound that is easy to play while having a high response. It has expressive power to freely control the tone at hand, sharpness in cutting, speed feeling at the same time.

DRIVE: Adjust the strength of the distortion.

BASS: Adjust the tone color balance according to the characteristics of the amplifier centering around the low mid.

Batteries are not included.