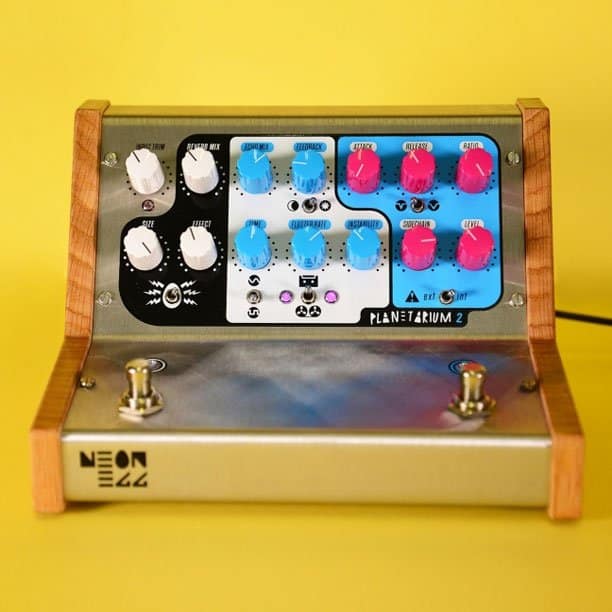 The Planetarium, from UK builder Neon Egg, is an adorably vintage-synth-shaped, non-reroutable creative multi-effect. It consists of a stereo modulated reverb running into an echo (with stereo modulation) and then into a compressor (with external sidechain).

As abundantly clear from its form factor, this is a device built with the creative musician in mind, and – according to the builder – “it excels at creating huge lush swirling reverbs and echoes, most at home in ambient and electronic genres.”

We’ll soon add it to the following “best of pedal lists”: Best Reverb Pedals for Ambient and Shoegazer and Best Stereo Reverbs.

The newly released v2 of the NEON EGG Planetarium features the following improvements:

• Added compressor ’short/long’ switch. This makes it much easier to dial in the exact settings you want. Also widens the available range of available attack and release times.

• Compressor detection circuit is now stereo rather than dual mono. This stops the stereo image from pulling sideways if for example you have a loud drum hit on only one channel.

• Added reverb/delay output pad switch (on the back panel). If you are using a quiet instrument you can now crank up the input trim to hit the reverb and delay at the optimum level, then pad the output down so your level remains consistent when you bypass the pedal.

• Mono/stereo switching is now done with a switching jack rather than a switch on the rear panel.

• The Planetarium 2 runs off a 15v power supply (included) for increased headroom and to allow for additional power filtering. Depending on your settings it can now output up to about 10v peak to peak, meaning that in many situations you may be able to interface with eurorack gear without needing a ‘go between’ module.

• Changed the LED colours (because the pulsating pink LEDs looked too good not to). Also made them a bit dimmer so they don’t blind you on stage.

• Wooden ends are now made from oak. Walnut ends are still available on request.

• Various other little tweaks to the circuit.

Here are the videos of the NEON EGG Planetarium.

The Planetarium is a stereo reverb and chorus, running into an echo (with stereo modulation), which then runs into a compressor (with external sidechain).

It will create smaller more realistic reverbs, but it wasn’t really designed for realism. Where it really excels is creating huge lush swirling reverbs and echoes, most at home in ambient and electronic genres (and maybe some 80’s synth pop). Combine it with a fuzz pedal though and you’ve got instant post rock – It will create the most monstrous walls of evolving sound….then kick in the side chain compressor and make it pump – live to a drummer (or anything else) without needing a computer or click track.

The chorus and modulated echoes make a beautiful combination and will create tapey wobbly magic from any instrument you choose to run through the pedal.

If you want to make epic cinematic music or blur the lines between electronic/post rock/ambient genres then this pedal will help get you there (but if you are looking for a tool for your Status Quo covers band you’re probably on the wrong website..).