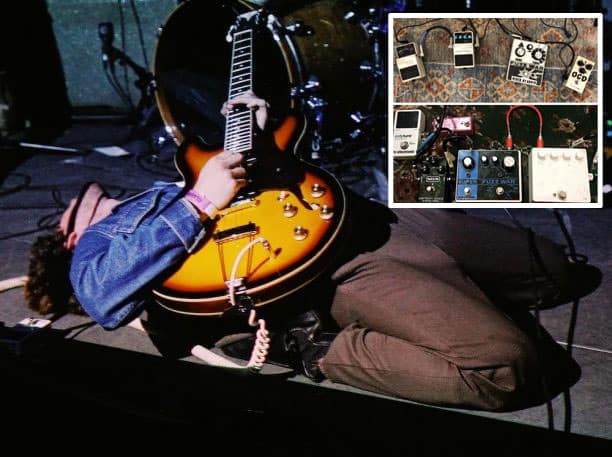 Brooklyn Native Sun‘s fast paced and heavy handed mix of garage and psych rock has earned a space in the soundtrack to our summer 2018 trips. Their recent EP “Songs Born from Love and Hate” features many flavors of fuzzed-out guitars, so we thought it might be interesting to ask the band a few questions about their pedals and  gear.

Tell us about your first time with… a guitar pedal. How old were you and what did you stomp on?

JAKE PFLUM (guitar/back vox) : My first pedal was a Boss DS-1 Distortion. My mom just recently sent me a photo of me holding it proudly on Christmas morning, coincidentally… I think I might have been in 6th or 7th grade.

MAURICIO MARTÍNEZ (bass/back vox) : I was like 9, one of my older cousins is really into metal so he used to have a Boss Distortion pedal and a ProCot Rat. I definitely loved the Rat from the beginning.

Was there a specific pedal (or two) that kind of changed your life?

JP: Death By Audio’s Fuzz War, unquestionably. I’ve never played a pedal with so much character before, and its big knobs make it easy to adjust with my foot during a show. That pedal is my baby.

DG: Jake lets me use this pedal he has that’s made by Jext Telez called “The White Pedal” and it replicates all the overdrive and fuzz sounds found on The White Album; supposed to mimic different tones on those old Vox Conquerer amps. Think the smooth fuzz of “Happiness Is A Warm Gun” to the rawness of “Helter Skelter” in a pedal. It’s extremely versatile and not so white anymore.

MM: Dunlop’s Fuzz Face Hendrix marked me completely, but then the

EHX’s Russian Big Muff (Black one) changed me in every way.

What guitar and amp do you use?

JP: I use a Gibson Les Paul and a Fender Silverface Twin Reverb.

DG: Epiphone Casino or a Japanese Jazzmaster (as of recently) depending on the set – we never play the same set… or whichever one doesn’t break on me on the spot. I play em through an old Fender Bassman head and Bassman 4×12 cab.

Do you get your signature distortion from the amp or pedals?

DG: The amp. There’s nothing better than the sandpaper grit yet smoothness of a tube amp turned up fucking loud and breaking up. Sound is all just manipulation of the pleasant and not so pleasant. I try to really push the amp, it’s the only way you’re going to get actual character out of your tone – listen to Tom Verlaine…

JP: Sometimes the sound engineers at venues get combative about our amps’ size and the volume we like to play at, so I use a Fulltone OCD up front just to get my Twin sounding angry without spending our entire soundcheck arguing with someone I just met.

MM: I would definitely say both. The pedal makes the distortion, but the clean tone you get from the amp is also REALLY IMPORTANT to make it sound that way.

What (else) do you have on your pedalboard right now and how do you use it?

DG : A small pink reverb pedal, old Bassman heads don’t have a reverb knob (I have no idea what it is but it was purchased in Nashville a couple years ago); MXR Carbon Copy; DBA Super Fuzz War; Ibanez Tube Screamer.

JP: Other than the OCD and the Fuzz War, I also run a Boss DD-3 delay into a Boss Chromatic Tuner and that’s it. More than three effects and a tuner is too much for me, personally. I tend to rotate the characters around though, sometimes I’ll use a Death By Audio Fuzz War Overload instead of the standard Fuzz War, and sometimes I like to use their Reverberation Machine instead of the Boss delay.

MM: I use a TC Electronics Polytune 3 as tuner and first in line so i can cut the signal Then the EHX’s Russian Big Muff as my main Fuzz (ALWAYS GO WITH THE RUSSIAN). I also use a Seymour Duncan Pickup Booster on ALL THE TIME. It gets me a cool drivey clean tone, and with the fuzz on is just madness.

Are there any pedals out there you are itching to buy?

MM: I’ve been thinking a lot about the Tech 21’s SansAmp Bass Driver. I would like to crank up the output so it can heat everything up.
Also i wanna try different fuzzes from Death By Audio, I love what they’re doing!

What other like-minded local emerging acts do you enjoy these days?

DG: Anything sincere and not contrived. No scenesters or bourgeois disguised “in rags” – music bringing back a voice to the proletariat (with self-awareness) which unfortunately there isn’t much of and contributes to the stale nature of things. Music for the love of making and playing music and utilizing it as a tool for progress and questioning.

JP: Gnarcissists, Stuyedeyed and Grim Streaker are class acts with great heads on their shoulders. I like a band that makes you feel like both your body and mind have been totally rewired after seeing them live, and those three have done it to me several times now.