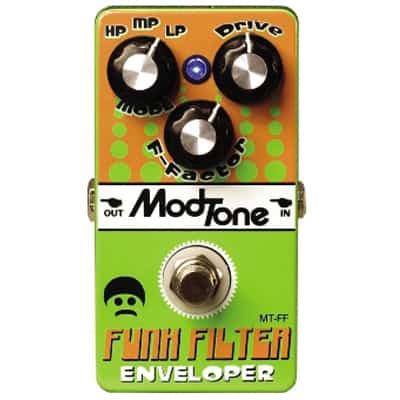 Funky automatic filters are one of my favorite alliterations in the guitar effects world. As bizarre as this may sound, these kind of effects seem to bring a level of consciousness to the guitar notes played through them – it’s like if that riff was talking to me! The effect in question is also known as an auto-wah, since the filter is triggered by the dynamics of your playing rather than moving a foot pedal back and forth. It’s this dynamic triggering of the filter that gives the envelope filter its own unique sound. Notable guitarists using this effect include Frank Zappa, Jerry Garcia, and Pete Townshend. It also sounds beautiful on bass and has been used by Flea and Bootsy Collins on numerous occasions.

Today’s offering comes to us from the aesthetically pleasing retro designs of ModTone. The Modtone Funk Filter Enveloper is in essence an envelope triggered auto-wah with controls for Lowpass, Midpass and Highpass filter modes, F-Factor filter width, and Drive input sensitivity. It is a true-bypass circuit with one input, one output and operates on 9V or standard power adapter.

In practice, the first thing I did was plug in my trusty ES-335 knock-off and go to town, funky town that is. My guitar has a set of Alnico Humbuckers that run a little hot (as I found out the hard way). At first I thought the pedal had a defect because it wasn’t responding to the dynamics of my playing. Come to find that if you set the Drive knob too hot it will actually cause the envelope’s detector circuit to falter. So because my pick-ups run a little hot, I barely had to turn the Drive knob toward clockwise for funk to commence. Once I straightened that out I immediatley began auditioning the three filter modes. I started with the Lowpass mode and was able to coax some interesting sounds by tweaking the F-Factor knob; this is essentially a filter width control. I especially liked how this filter affected the lower registry of my playing. The more the F-Factor knob was turned clockwise, the more aggressive the filter became and the more vowel-like the tone. I found this to be true in all filter modes.

The Midpass mode reminded me of traditional Wah tones. Lots of bite in the mid frequencies made for nice accents on mid to high registry riffing. However, my unexpected favorite was the Highpass mode. It made the whole tone very bright and jangly. The harder I played the more high frequency bite I was able to get. It was really fun to play funky triads in the upper registry. I’m not that into funky guitar tone personally, so I guess that’s why I liked this mode so much. I was able to get some really odd sounding dynamics in this mode and my creative juices began flowing.

This analog multi-mode filter sounds really musical and warm but can also get pretty aggressive – which I liked. In most cases I think I prefer a pedal like this rather than a traditional Wah pedal. It’s nice to free up your foot while having the pedal respond to your dynamics. If you are thinking of giving the gift of an Enveloper to your board I would certainly give the Modtone Funk Filter a look, and at a meager $149 street, you really can’t go wrong. –Gus Green

Video Below Courtesy of TMNTV