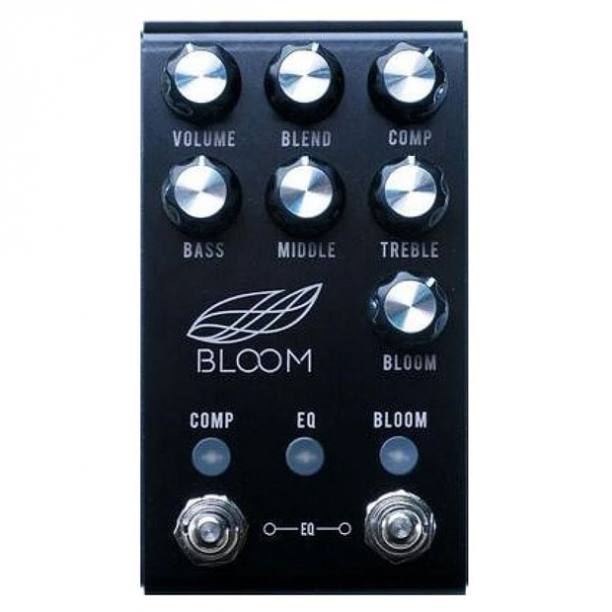 In the last couple of years, innovation in the pedal realm has been mostly about fitting in a compact enclosure what in previous years would fit in larger cases. However, a handful of companies went beyond that goal, and Houston’s Jackson Audio belongs to that shortlist. Their Bloom v2 can be easily categorized as a next-gen utility box.

An LA2A-style Optical Compressor with a 3-band studio-grade EQ, the Bloom offers handy extra features like a Blend knob, Presets and Midi compatibility, and an original Boost/Sustainer circuit (“Bloom”) that works like nothing else we’ve seen before:

The left footswitch triggers the compressor while pressing both footswitches at once will trigger the EQ.

As if all this was not enough, it also features a Side Chain jack/loop that allows an external percussive source to trigger compression – for the classic ducking effect, and that can also be used with an external effect like an EQ to tailor the response of the compression.

Lots to chew on here! These videos should halp get a better idea of the sound and the potential of the Jackson Audio Bloom V2 Compressor.

The BLOOM from Jackson Audio is a comprehensive dynamic engine that is designed to give guitarists maximum dynamic tonal control in ways never before possible. The BLOOM v2 – MIDI takes everything people love about our original BLOOM and updates it with MIDI!

A three-fold device, the Bloom manipulates the dynamics of the instrument by way of precisely tuned optical compression, equalization, boost and sustain circuits which can be activated separately or in tandem with each other.

Keep reading below to learn how the BLOOM has become a modern classic on countless pedalboards!