How to Use Motion Control as an Expression Pedal 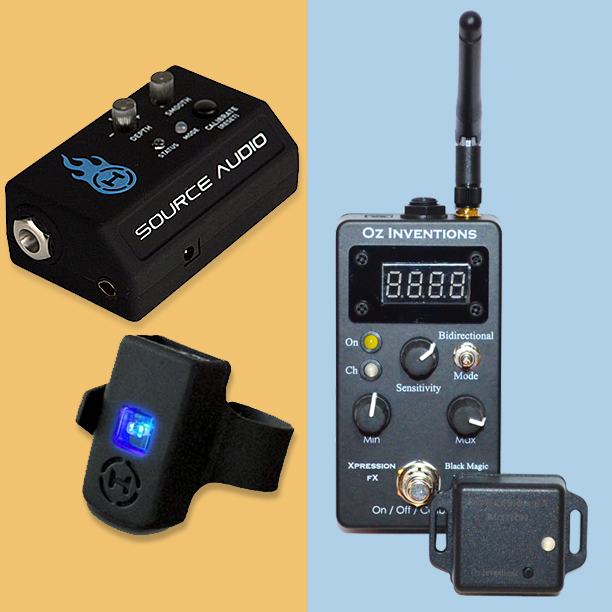 Expression pedals are the go-to tool of choice for creative guitarists who like to alter their effects’ settings while performing. However, since gravity forces humans to use at least one foot for balance, the adventurous guitarist interested in controlling more than one setting at once will have use a different body part to do so. Enter motion detection devices.

Motion detection technology has been around for a long time. Wouldn’t it be cool if you could incorporate it into your guitar rig to give you new ways to control your effects through motion?

As it happens, musical-instrument manufacturers have been playing with the idea for years. Roland has featured its D-Beam controller on synthesizers and groove boxes for the past two decades, allowing players to shape sound and effects through hand movements by interacting with an infrared beam of light.

Granted, the D-Beam benefits keyboard players and not guitarists. But early in this century, Alesis got into the act with its airFX, a multieffects device that responds to hand movements. The airFX wasn’t produced for very long, and it was probably never going to catch on as an effect for guitarists, who generally need to keep both hands on their instrument.

Since that product’s debut, Source Audio has continued to offer effects that make use of the Hot Hand controller. In addition, the company also offers separately the Hot Hand Universal Wireless Controller, which can be used with Source Audio products and any third-party effect that has a 1/4-inch expression input. Source Audio also makes the Hot Hand USB Wireless MIDI Controller that lets you communicate with MIDI devices and compatible software.

Similar to Source Audio, the Xpression Fx Black Magic Motion is a new motion control device from Australia’s Oz Inventions. The company offers two models: a TRS model for controlling pedals with expression inputs and a MIDI version. The TRS model is designed to connect to third-party effect units, keyboards and other devices with a foot controller socket, while the MIDI model connects to any third-party MIDI device using a five-pin MIDI socket.

Whichever motion-control device you choose, you’ll find new ways to bring expression to your tone through movement and add dramatic depth to your performance.