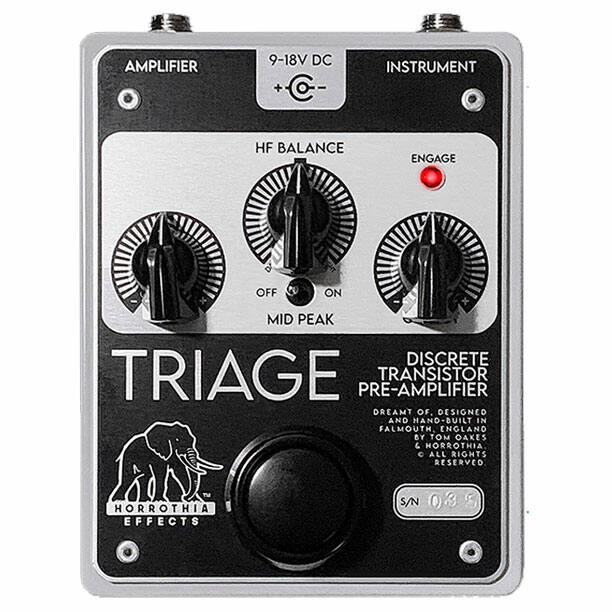 From a UK-based builder of high-end effects with a less-is-more approach comes the Horrothia Triage Preamp, a discrete transistor pre-amplifier.

Born from a rib of the company’s low-gain overdrive Teeth, with which it shares some circuit and tonal similarities, the Triage is both a front-end preamp and an overdrive, featuring a JFET preamp feeding an overdrive with a transistor-based discrete opamp clipping.

The overdrive stage has a Mid Peak switch that, when engaged, delivers a Tubescreamer-style mid bump. The tone can be further sculpted through the HF knob which cuts or boosts the high frequencies.

When the Mid Peak switch is off and the HF is in the center, it acts as a full range boost.

A high-end front end for all, from clean to nasty.

Born of the same DNA as the Teeth, the Triage has your boost, grit and level covered. Elements of the circuits are similar, but the Triage dwells on the wet side of the Teeth’s design.

Triage is an all-transistor, ground-up Horrothia design. A JFET preamp (followed by an internal clean-level trimmer) feeds an overdrive stage made using a transistor based discrete opamp – no chip ICs here. The overdrive stage has a voicing MID PEAK switch. Off, the Triage is a full range boost. On, there is a distinct, carefully chosen mid-bump. The HF balance control is a high frequency cut or boost – dialled to full acting like a hot knife through a band mix.

Front end preamp or overdrive? It’s both. Bass and acoustic as well as electric? Sure thing. Dial it right down to use as a front end to brighten up vintage pickups? Uh huh. Wind it right up for compressed crunchy overdrive? In spades.

As always, the Triage is hand built with love, one by one, in Falmouth, Cornwall, UK.