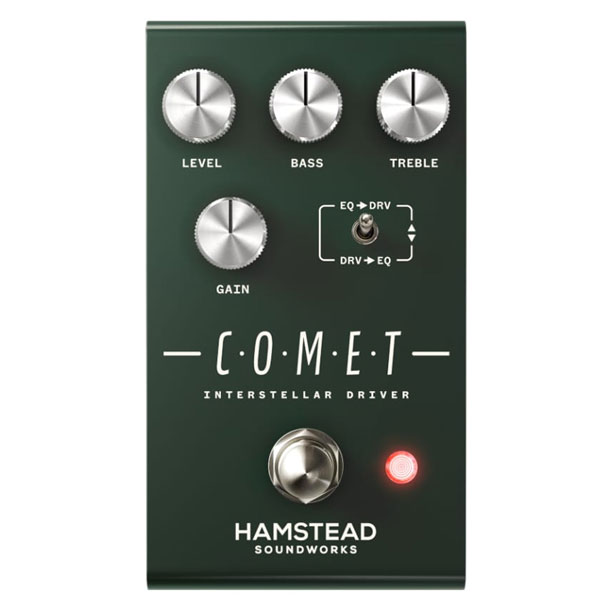 In the global race to build an overdrive pedal that’s “versatile, transparent, dynamic and/or full of character” (those are the words that everyone’s after in this niche) Cambridgeshire’s Hamstead Soundworks is faring very well indeed, having released a couple of very well-received drive pedals.

The brand new Comet can be filed under the “versatile and full of character” overdrive niche.

A toggle switch lets you route the two knob EQ section before or after the drive while also altering the gain structure of the circuit, allowing for extremely varied tones:

DRV>EQ mode for a dynamic and transparent clipping circuit for studio-style EQ sculpting.

EQ>DRV mode for organic clipping style with a wide range of character overdriven tones that can be pushed all the way to into fuzz territory.

Hidden to the naked eye, an internal switch turns on Hi Gain Mode which facilitates the creation of distorted and heavy fuzz sounds.

An internal Hi-Cut pot lets you adjust the high frequencies to suit any rig or tonal preference.

Check out the sound of the Hamstead Comet Interstellar Driver in the videos below.

The Hamstead Soundworks Comet is a meticulously voiced overdrive pedal that opens up a whole world of tones from a simple control set. Representing our pursuit to take analogue drive circuitry to new heights, it can be moulded from boutique sounding overdrive with a vocal midrange, right through to a rich and creamy fuzz. Both transparent and character drive tones are accessed via a deceptively simple, but incredibly powerful switch. Furthermore, your tone can be shaped via an intuitive two-band EQ, for additional tone sculpting.

The EQ/Drive switch sits right at the heart of Comet, providing two distinct tonal paths. While on the surface it may appear to be just a simple physical switch, it’s much more than that. By selecting DRV>EQ or EQ>DRV, you not only change the order of the Drive and EQ circuits, but also the type of clipping and gain structure circuitry. The design uses complex analogue engineering on the inside, to be simple and instinctive to use on the outside.
DRV>EQ mode gives you a very dynamic and transparent clipping circuit and places the EQ after the Drive Circuit, for studio style EQ sculpting.

EQ>DRV mode moves the EQ in front of a more raw, yet organic clipping style that boosts the input gain into the drive circuit. Doing this provides a wide range of character drive tones that can be pushed all the way to into super-saturated fuzz tones.

From pre-amp boost and right through to fuzz, Comet has a very wide range of gain available onboard. However, to push the circuit even harder into high gain territory, we’ve also added an extra gear. Selectable via an internal switch, Hi Gain Mode can open up heavy crunch and distortion or even highly saturated fuzz tones.

While Comet is voiced to work excellently with any guitar or bass set-ups straight out of the box, we wanted to add a little extra flexibility for those players who really want to fine tune their sound. With the internal Hi-Cut pot, you can tailor the high frequencies to suit any rig or tonal preference.