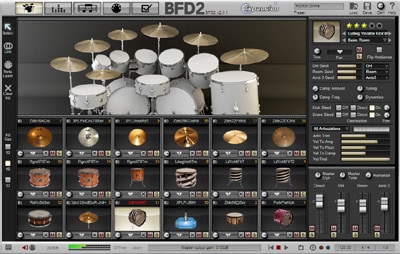 FXpansion’s BFD redefined the standards of samp[led drums, making them sound much closer to the real thing.

BFD2 is the second edition of Fxpansion’s industry-leading full-featured acoustic drum simulation software. The package comes with over 55 gigabytes of lovingly recorded drum samples, but samples are just the beginning of what BFD2 has to offer musicians and producers.

Immediately upon starting up BFD2, you’ll notice that the interface was designed from the ground up for creativity and ease of use. Anyone familiar with a drum kit will be at home putting together a custom set from BFD2’s fairly large number of custom drums. With flexible keymapping options and a robust groove editor, BFD2’s interface was clearly designed with the understanding that no two people are going to use the software in exactly the same way.

Just to get it out of the way quickly: the drums that you can create with BFD2 sound absolutely incredible. The quality of the samples, velocity layers, and articulations are so high, actually, that if your performances aren’t up to par, your tracks are going to sound fake and amateurish. A good velocity-sensitive drum pad is almost necessary for entry, but still might not prove enough for all styles of music. You may need a full electronic kit for realistic rock drums, so keep that in mind if you’re looking to create 100% authentic tracks – they’re only going to sound as good as your performances.

BFD2’s kit section is so easy to use that it might seem that the whole package favors style over content, but one look at the package’s mixing section proves that this program isn’t just about good looks. BFD2 gives you access to an array of virtual microphones positioned throughout your virtual kit. At first, immediate access to two microphones per kick drum, three per snare, overhead microphones, room microphones, and more can at seem daunting, but after using BFD2, you won’t want to wrestle realistic mixes out of programs without them. You’ll be able to reroute the many microphone tracks to separate outputs within your DAW, making the process of mixing drums in BFD2 virtually indistinguishable from mixing a real kit. Seasoned pros will be at home with the demands of the system, while newbies have the chance to learn how to mix a kit from the ground up. It’s demanding, but it’s effective and fun.

For all of its revolutionary features, BFD2 isn’t without its minor shortcomings. Since the program was built from the ground up to be a solution for acoustic drums, it’s not adequate for electronic drums and drum machines. Another possible issue with the program is that all its samples were recorded in the same space, AIR Studios in London. The upside is that tracks made in BFD2 are cohesive, sharing similar acoustic qualities, but the downside is that tracks made by BFD2 can start to sound very similar. I found myself spending a considerable amount of time dirtying tracks up to give them a little more personality.

This review has only been able to scratch the surface of the possibilities created by Fxpansion’s incredible drum production suite. If you work with a DAW, have need for realistic acoustic drum tracks, and don’t have access to a recording studio and a professional kit, BFD2 is an essential addition to your setup. With a large number of expansion sets already on the market and more on the horizon, we can’t recommend it highly enough.