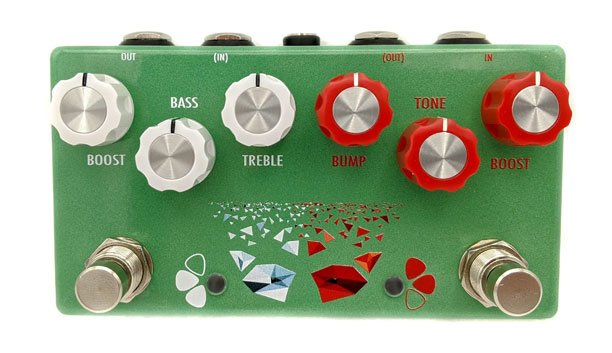 Sometimes simple yet innovative ideas are the best ones we come up with, and Flower Pedals‘ Poppy seems to belong to that category: it’s a dual boost with separate in/outs for each channel, so that you can insert the two circuits anywhere you want in your pedal chain. If you don’t plug anything in the auxiliary ins and outs, the two circuits are stacked on top of each other.

The boosts are not identical:

The Red Poppy is the same opamp based boost circuit from the original mini Poppy pedal and it’s basically a mid-frequency parametric boost (i.e. you can select the frequency to boost).

Both circuits utilize a boost control which is a bias control, which allows for as much clean headroom as possible.

Here are the first videos of the Flower Pedals Poppy.

Are the colors you’re getting from your sound garden not quite standing out enough? Do you want more tonal options from your boost pedals? Give the Poppy Dual Boost a try. Perfect for tone shaping, driving a tube amp or pedal, or just giving you that extra boost you needed for your solo.

The Poppy operates on 9V, but boosts that to 18V internally to ensure that you have all the clean power you need. It is essentially 2 boosts housed in a single 125B enclosure. The 2 sides have slightly different controls and different circuit topologies. The Red Poppy is the same opamp based boost circuit from the original mini Poppy pedal. It has 3 controls: Boost, Tone, and Bump. Boost controls the over boost level you’re getting, while the Bump and Tone controls give additional tonal abilities. The Bump control boosts a certain range of frequencies more than the rest, and this frequency range is controlled by the Tone control. So if you really want to just get a mids boost, or get more of a trebly sound, turn up the bump and choose your desired frequency. The White Poppy is a new circuit which uses JFET transistors and a baxandall tone circuit for a more tube amp-like tonal quality. It also has 3 controls: Boost, Bass, and Treble. As usual, the Boost controls the overall boost in the circuit, and the Treble and Bass controls allow you to shape your eq to your liking.

Both circuits utilize a boost control which is a bias control, which allows for as much clean headroom as possible. But if you’re looking to get dirty, try running them both at the same time! The Poppy also allows you to place the Red and White sides at different places in your signal chain if you desire, due to it’s extra in and out jacks. So if you want to place one before your drives, and one after, it’s quite easy! It also features the ability to choose whether each side of the pedal defaults to on or off at power up. Simply hold the footswitch of the side you want to change while plugging in the power to the pedal to toggle the setting. So if you’re looking for lots of versatile boost in a compact package, check out the demo videos and plant a Poppy yourself!