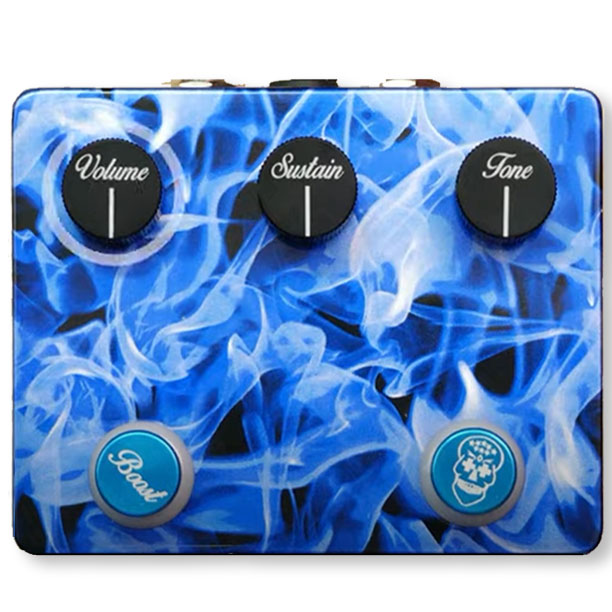 The pedal shares the controls of its muse, but with a lot more gain added to the Sustain knob, so that the amount of distortion can be easily controlled from the guitar’s volume knob (the circuit cleans up very well when fed a low signal).

The added boost knob gives the tone a push overall, but also a mid-frequency hump that allows the traditionally mids-lacking Muff tone to stand out in a mix.

You can listen to the sound of the Flatley Solaris Pro in the videos below.

The idea behind the Solaris Pro was to create a simple fuzz box that would do a few tones well, a “fuzz without fuss”. To this end the gain is pre-set to max, the volume control of your guitar can be used to change the tone so don’t forget to experiment. However, for the working musician we decided to add the sustain control and swap out the Norm/Norm+ toggle switch for a boost foot switch to make it a little more functional for live show applications. Hence the Solaris Pro version was born and comes standard with two halo light rings fitted.

The blue halo light ring installed diffuses the light when playing live, avoiding being blinded by the standard LEDs just as you are about to go into that all important solo thus giving a larger area to see where the pedal is located easily on the pedal board on darkened stages. The addition of the aluminium foot topper gives you more real estate for contact when switching the pedal on and off during quick changes when playing live.

All Flattley “Platinum Range” pedals are hand processed in our Flattley paint shop. The bare aluminium enclosure is abraded prior to painting with the etch primer. The etch primer acts as a anti corrosive layer and allows the primer to bond to the enclosure ensuring a tough resilient paint finish.

Multiple coats of base coat primer are applied which are then lightly abraded to remove any blemishes or paint speckles prior to the application of the base colour. We apply several coats of base colour until an even coverage occurs and the base colour develops rich smooth depth. Metallic holographic chrome flake is then applied using a clear inter coat which adds that all important Flattley sparkle.

The pedal enclosure is now ready to be hydro dipped in its Flattley graphics. This is the process whereby the graphics are applied using water activated film, the residual PVA film is then washed off and the enclosure is then allowed to dry naturally.

Once dried the lacquer process begins. Each “Flattley Platinum” pedal has a minimum of three coats of lacquer which are all wet sanded between coats. Once the lacquer has hardened, it is then hand polished using three different grades of polishing compounds and it then has a final polish to achieve a high gloss finish using a wool finishing pad. This process gives the smooth deep lustre finish that is inherent in all Flattley Guitar and Bass effects pedals.