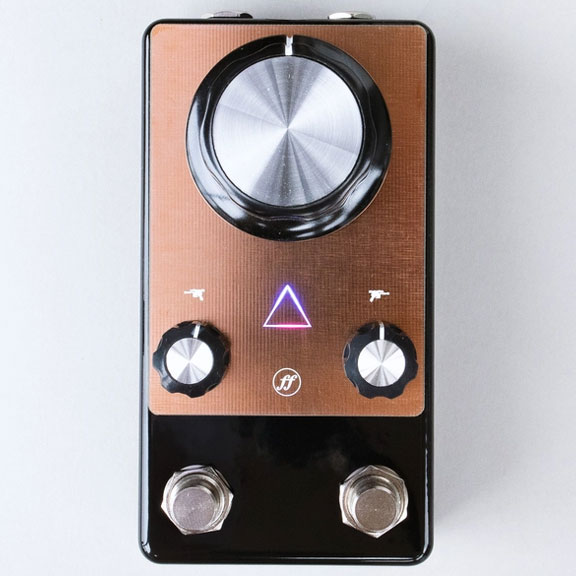 With the Odin fuzz, Norwegian boutique builder Fjord Fuzz delivers two separate, non-stackable fuzzes, one with an octave-up and one without, both inspired by the classic Foxx Tone Machine.

Removing the tone and clipping stages and adding a louder output stage, these circuits deliver a massive mid-forward fuzz. The left footswitch toggles between octave up and regular fuzz.

We asked company owner and designer Daniel Thornill some clarification about the circuit, here’s what he said:

Both fuzzes are highly modified fOXX Tone Machines. The non-octave version drops half of the rectifier system responsible for the octaving, but also the low pass filter on the preamp.
The octave mode comes stock with 10x higher output gain to make up for some of the lossiness in the octave rectifier.
Both fuzzes drop the EQ system in the original fOXX, for more mids, and the entire limiter system and switch out the output gain stage for the one I used in EMBLA. This makes for a much louder and more controlled fuzz.

While version 1 only had the huge volume out control, V2 adds individual gain controls for fuzz and octave.

We added the Fjord Fuzz Odin to our article about the best Foxx Tone Machine clones and evolutions.

User-friendly, classic fuzz tones, with or without octave-up effect.

ODIN takes one of the best octave-up fuzz circuit designs of all time, strips away all the fluff and over-engineering and leaves you with a simple, yet powerful device. Turn it on and you are greated by a wonderful, saggy, yet open and carefully compressed fuzztone, not too dissimilar from the old smiley-faced fuzz boxes we’ve all tried to love. This one however is louder, more mids-forward, less compressed and just a joy to work with.

Click ODIN into octave mode with the secondary foot switch and you now have one of the best octave up fuzzes on the market roaring from your speakers. It’s really loud and it’s tuned to let your guitar jump out of any mix without getting pointy and harsh.

The two fuzzes are entirely discrete designs within the box, making switching between them a seemless experience, not usually something you’ll find with this type of circuit. Making the two channels independent also made it possible to choose components to specifically suit each side.

New for Autumn 2021 is the addition of individual gain controls for each channel.

I did this for two reasons: you can now remove the control plate if you ever wish to clean or polish it, and a bunch of people have been asking for gain controls, so there you go!