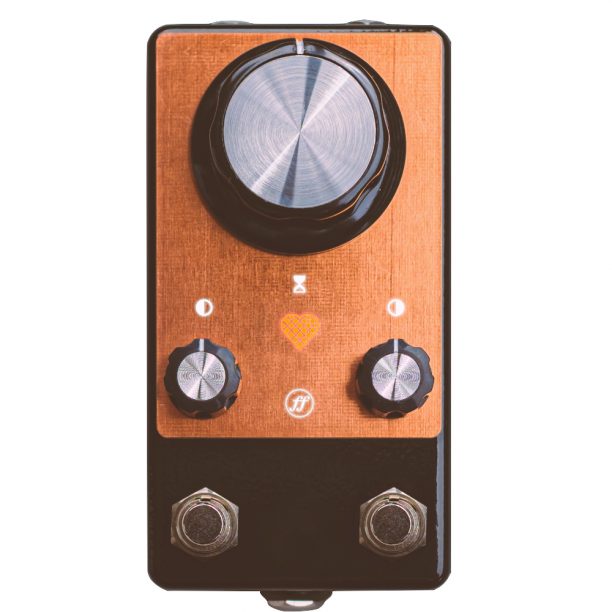 It uses an incandescent light bulb and photosensitive resistors, the same technology that was used in the original Uni-Vibes from the 1960s. The large center knob controls time, while the smaller left and right knobs control two different depth ranges. The second footswitch engages the second depth control, so it can function as 2 presets. Also accepts expression control via the TRS jack.

We added the FREI to our article about the best Uni-Vibe Pedals.

FREI was the Norse God of Peace and Love.

It’s the obvious choice of name for a vintage style vibe!

It’s also the name of my youngest son.

FREI is a fully discrete, all analogue, vibe pedal. It uses an incandescent bulb with corresponding LDRs for chewey, swirly, throbby, psychedelic vibe sounds. I spent a lot of time sourcing the perfect parts, to keep the vibe hefty and the price tag not as much. Some vibes have a tendency to get way too extreme once you turn your fuzz on, so I added a secondary foot switch for you to toggle between two independent depth controls. This means you essentially have two presets available.

Expression input accepts a TRS plug. Use an expression pedal with a 10k ohm potentiometer.

Go to www.expressionpedals.com to see which ones fit! The BOSS EV-30 is one of them. There’s a slight volume boost when the pedal is on, because we’re Fjord FUZZ, not Fjord Pedals.

Stick a KVASIR in front of it and a FREIA after it for the greatest of times.