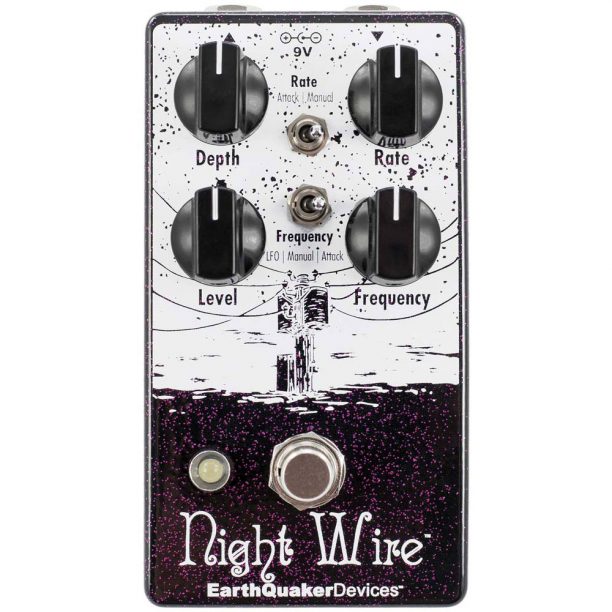 The Earthquaker Devices Night Wire V2 does what classic harmonic tremolos do, but adds an envelope tremolo option that is quite unheard of.

When both toggles are set to Manual mode, the circuit splits your signal into high and low-frequency ranges and then applies an LFO to each that is reversed 180 degrees – just like any other harmonic tremolo.

When the Frequency toggle is set to manual, you can set the frequency at which the two ranges are divided, while in LFO mode that point will keep oscillating together with the LFO.

There’s an Attack mode both for Rate and Frequency: when in the former, the Tremolo’s speed will be triggered by the strength of your pick attack; when in the latter, the pick attack will also affect the frequency range.

Another nifty trick is that when the Depth is set to zero, the Night Wire V2 delivers fixed-filter effects.

V2 also offers a flexi-switch that can make the pedal operate as a momentary effect when held.

The Night Wire is a feature-rich harmonic tremolo. What is harmonic tremolo? In short, the signal is split into high pass and low pass filters, then modulated with an LFO that is split 180 degrees. The Night Wire takes the traditional harmonic tremolo a few steps further by allowing the center point of both filters to be adjusted for different tones. The filter frequency has three modes: Manual, LFO and Attack. In Manual mode, the center point can be set to a fixed position with the frequency control. In LFO mode, the filters are continuously swept and the frequency control adjusts the speed. In Attack mode, the filters are dynamically swept according to pick attack and the frequency control acts as a range control, much like a standard envelope filter. The tremolo section has two modes, Manual and Attack. In Manual mode, the speed of the tremolo is governed by where the rate control is set. In Attack mode the speed is controlled by pick attack and the rate controls the sensitivity; the harder you pick, the faster the rate and vice-versa. The tremolo can be subtle and shimmery or full-on throbbing depending on where the depth control is set. With the depth set to zero, the Night Wire will act like a fixed filter, phase shifter or envelope-controlled filter depending on which mode the filter frequency is in. It also features a cut/boost volume control to get your levels just right.

1. Depth: Adjusts the depth of the tremolo. More clockwise, less counterclockwise. When fully counterclockwise, the amplitude modulation will be removed and the Night Wire will function as a fixed filter, envelope controlled filter or phaser depending on where the Frequency toggle is set.

2. Rate Toggle: This toggle lets you select between two ways to control the speed of the tremolo. Attack lets you adjust the speed by pick attack. In this mode, the Rate knob controls the sensitivity of the dynamic tremolo. The higher the rate and harder you pick, the faster the speed will rise and vice versa. In Manual mode, the Rate control adjusts the speed like a common tremolo.

4. Level: Sets the output level, unity is around noon.