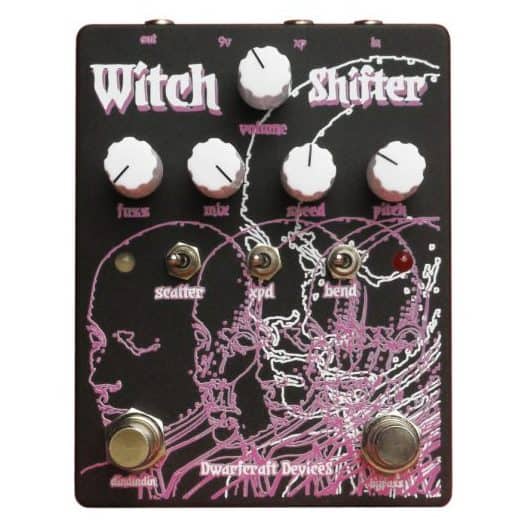 The folks at Dwarfcraft Devices have been on fire lately, releasing a pedal after another.

Their Witch Shifter is an Octave Up/Down effect with built-in Fuzz and an under-the-hood Echo. But of course, like in all devices built by this manufacturer, there’s a lot more to it:

Pressing both footswitches at once gives you access to new controls to edit the Echo settings, transforming the Fuzz, Speed and Pitch knobs into Time, Wet/Dry and  Repeats.

It’s surprising how flexible and creative this pedal can get: with the fuzz turned off, it can generate subtle ambient textures and add intriguing. sustained glitchy repeats. When used gently, the Scatter function can contribute to haunting, dissonant atmospheres ranging from the dreamy to the nightmarish.

Turn the fuzz on and things get nasty, although the amount of fuzz can be blended in with the “clean” signal for those who enjoy sonic compromises.

This is definitely a pedal for the creative type (you can find more here), check out these videos of it:

Check out the video shot directly by Ben, the company owner and circuit designer.

It’s more than a pitch shifter, it’s an engine of creation.

Yes, it smoothly shifts pitches from one octave down to one octave up, but the doppler effect courtesy of the “Bend” toggle and the chaotic pitch jumping from the Wizard of Pitch are also included.  The “Scatter” toggle turns the pitch knob into a chaotic pitch modulator, often landing between pitches for unique confused machine noises and tortured-tape-machine warbles. We’ve also integrated the “DinDin” stomp, freezing the Witch’s audio buffer for glitched out repeats.

Speaking of repeats, doesn’t an echo make everything better? Of course it does, that’s why the secret menu of the Witch Shifter controls a delay circuit.

The Witch Shifter is also our smoothest and cleanest pitch pedal, presenting you high fidelity audio.  Unless you want it dirty… in that case, turn up the on-board fuzz. You can turn the knob from pristine-clean all the way up to super destroyed digital damnation, with the old fashioned wizard’s hiss somewhere around ten o’clock on the dial.

We have also added expression control over the Speed or Pitch, assignable by toggle.

So take a seat in the Witch’s hut, and learn to make magic.