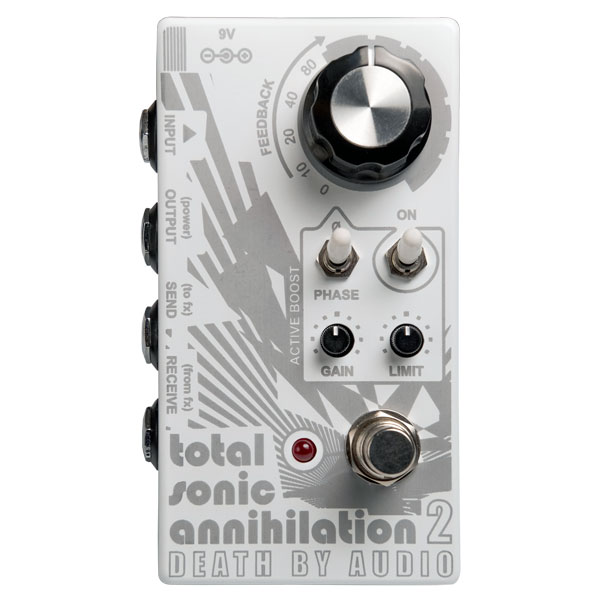 Since the early aughts, NYC’s Death By Audio has been on the forefront of a trend that has since then picked up a lot of steam: the one of stompboxes offering extreme sonic features (and apocalyptic names). We discussed this in depth in this 2017 interview with owner Oliver Ackermann, who also fronts acclaimed noise-rock trio A Place to Bury Strangers.

The original Total Sonic Annihilation was the device that started it all, back in 2002: it was the first stompbox released by Death By Audio.

[It] was a pedal that literally transformed all of your pedals into different effects by force feeding them back into themselves.

After sixteen years, Ackermann decided it was time to revisit his first born, redesigning it from the ground up: the new Total Sonic Annihilation 2 features totally new functionality and additional controls, which promise to create even more wildly warped alien space sounds than the original.

The TSA2, like its predecessor, works on a simple premise: what if effect pedals were patched back into themselves? What does it sound like for a filter to be multiplied by infinity? Or if your modulator was modulating its own modulations?

To allow this to happen, the TSA2 creates a “controllable feedback loop,” (the big knob) that – when the pedal is on – sends back to your effects their own wet signal, feeding their output back into their input as much or as little as you want.

The routing requires a little explanation:

So when the effect is off, the TSA2 simply routes your clean guitar signal to the pedals and then to the amp – as if it wasn’t there. But when it’s on, it feeds some of the wet signal back into the effects, with outcomes ranging from the haunting to the insane.

A few extra features like phase switch and limiter let you fine-tune/control the resulting sound, including a boost footswitch to bring things to the next level as far as dbs are concerned.

This is a pedal for creative musicians interested in exploring new sonic frontiers, check out the videos below!

Death by Audio was conceived in 2002 with the most insane pedal of all time: the Total Sonic Annihilation. Here was a pedal that literally transformed all of your pedals into different effects by force feeding them back into themselves. Fast forward to present day – through painstaking redesign and improvements, the original circuit has been reborn as the Total Sonic Annihilation 2. Totally new functionality and additional controls create even more wildly warped alien space sounds than the original. Go get some!

The TSA2, like its predecessor, works on a simple premise: what if effect pedals were patched back into themselves? What does it sound like for a filter to be multiplied by infinity? Or if your modulator was modulating its own modulations? The TSA2 creates a controllable feedback loop, causing your pedals to cycle back on themselves, feeding the output back into the input as much or as little as you want. Experience true sonic exploration: every unique pedal array will produce a vast world of textures and possibilities.

FEEDBACK: The big knob. This controls the amount the SEND (external effect input) is forced back into the RECEIVE (external effect output). This creates feedback within the circuit to create new unbridled and experimental effects and results. The more this knob is turned up the more intense and explosive the effects are. The ACTIVE BOOST is also in this loop and (if engaged) will be forced back into itself to create its own wild and interesting sounds if nothing is plugged into the loop.

ON: This toggle switch when in the ON position turns on the ACTIVE BOOST circuit.

PHASE: Flips the phase of the effects loop, only when the ACTIVE BOOST is on.

GAIN: Controls the amount of gain of the ACTIVE BOOST circuit.

LIMIT: Limits the output volume of the entire pedal only when the ACTIVE BOOST is engaged.

THE NEW FEATURES OF VERSION 2

If you’ve used a feedback loop pedal before like the 1st edition of the Total Sonic Annihilation then you know the vast world of insane and wild sounds that you can get. With this new updated version of the original the ACTIVE BOOST really makes this usable for so many more applications where the original fell short. For example if the effect in the feedback loop is out of phase with itself, the loop would turn the pedal just into a volume or blend pedal and not be that interesting. With the TSA2, just flip the PHASE switch and all of a sudden those once dormant possibilities are awakened! The BOOST also has a boatload of gain to awaken even the faintest effect into an unearthly behemoth and a LIMITER to tame the most unruly beast into a purring kitten. Experiment with as many different pedals in the FEEDBACK loop for unique and incredible results!

INPUT: Plug an instrument into this jack.

OUTPUT: The output of the Total Sonic Annihilation 2 is here. It connects to your amplifier.

SEND: Connect this to the input of the effect (or chain of effects) you would like to control and warp. If left unconnected it is connected internally to the receive jack.

RECEIVE: This is connected to the output of the effects in the feedback loop.

9V: Plug a 9V Negative Tip Positive Ring DC adaptor in here. When plugged in it will bypass the internal battery. NOTE: When the ACTIVE BOOST is not engaged, the pedal is completely passive and can work without power.