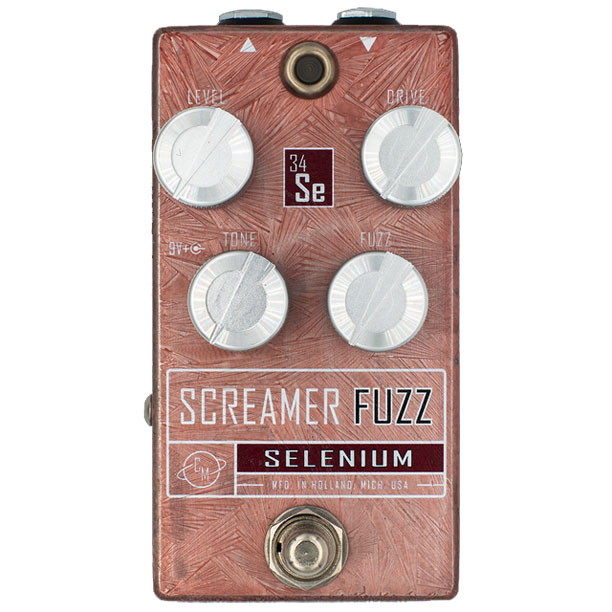 John Cusack had a supply of rare selenium rectifiers, an obsolete technology that has potentially never been used in a pedal before, and created a modified version of his screamer fuzz. Enter the Screamer Fuzz Selenium.

The result is a dark and full fuzzdrive with a thick creamy texture. With the overdrive and fuzz turned down it can be used as a preamp / tone shaper, and at higher gain levels the texture starts to fall apart creating a zipper-like velcro fuzz.

This is a new development in the world of distortion. To our knowledge, this type of technology has never been used in a distortion pedal before. The technology itself isn’t new, in fact, its usage in the audio world was long ago retired. The application though is revolutionary for achieving guitar overdrive/distortion. At the heart of the Screamer Fuzz Selenium, lives a vintage Selenium rectifier. Cusack Music owner Jon Cusack sourced these parts while working on a repair for a vintage amplifier. He purchased the rest of the inventory from the supplier – 26 pieces. The rectifiers are estimated to be 60+ years old. Jon kept these in his personal vault for over 20 years, until he found the right project for them: The Screamer Fuzz Selenium.

The Selenium overdrive’s sound is in a league of its own. At low levels, it fattens up the signal adding warm tube-like compression yet, it doesn’t limit your dynamics. It sounds and feels more like a parallel compressor with a low mid-range eq shift. As the drive gets turned up the magic of the selenium transforms from a tonal secret weapon to a zippery, smooth, fat overdrive. Blending in the LED fuzz circuit produces a very satisfying, distinct, 3-dimensional sounding fuzz. We haven’t heard anything quite like it.

The overdrive from the rectifier is achieved by running the signal through a series of plates coated in the earth element Selenium. Each coated plate functions as a diode, clipping the signal. By nature, the rectifier clips a portion of the waveform. This is how your guitar’s dynamics are retained. The rectifier is a massive component and is riveted to the side of the enclosure for stability and support.

For a component and sound so unique, we decided it needed a finish to match. Each enclosure has received a custom, 30’s era, Duco frost finish from Steve Olsen in Lansing, Michigan. This is similar to the finish used on a National resonator guitar. The finish crystallizes as it dries, rendering each pedal a unique work of art. (did they get a clear coat next?) Steve experimented with toner (true?) producing a bouquet of colors for the Screamer Fuzz Selenium. This particular finish was so time-intensive and toxic, that we will not be able to use this in the future on any other pedal. After the finishing process, the enclosures sat gassing-off for months inside of a storage bay. The pedals are completely safe now, just not for consumption.

The knobs are the custom, milled, aluminum knobs found also on our Germanium Fuzz.
selenium knobs

This is an extremely limited run of pedals. There are only 20 available for sale.

We began with 26 parts and enclosures. A few enclosures didn’t turn out and a number of the rectifiers didn’t meet spec.

Of the 26 attempted pedals, we are only able to sell 20. That’s it. Only 20 of these unique vintage Selenium Rectifier overdrive pedals are in existence. Each pedal is signed inside by Jon Cusack himself.

We hope to source a modern component that can deliver the sound of these particular vintage selenium rectifiers. Unfortunately, we haven’t found anything like it.

You can select your specific serial number when adding the Screamer Fuzz Selenium to your cart.