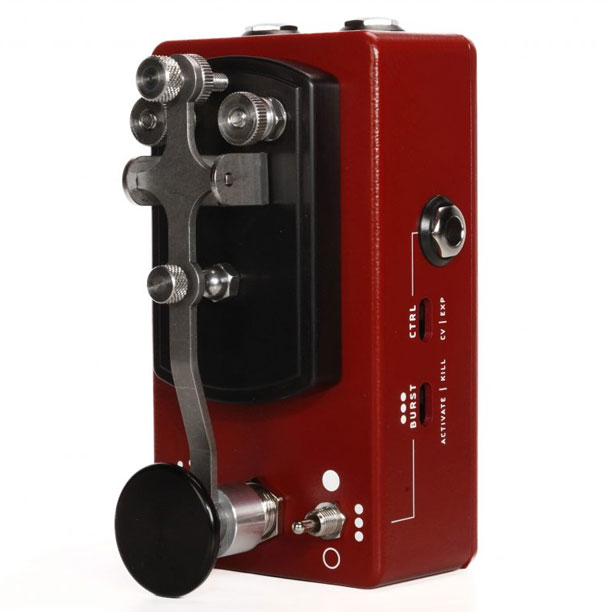 The circuit of the original Coppersound Triplegraph v2 (an autostutter and killswitch pedal) is embedded in the company’s monster Triplegraph pedal released in collaboration with Jack White of Third Man Records. The new version of the Telegraph is a full redesign with some nifty new features.

While the new design retains features of the original, it sports an updated and proprietary all-metal hardware, and expands the amount of control that can be done by foot.

The pedal features now 3 modes (one more than the original, called Burst) :

Burst mode can also be activated in conjunction with the Kill and Ativate modes using the Polarity switch on the side of the case.

Here’s the video of it!

Make way for the new Killswitch on the block! The successor to our popular Telegraph Stutter pedal, Telegraph V2 is our all new, redesigned killswitch and stutter system. Retaining aspects of the original design, Telegraph V2 features updated, proprietary all metal hardware. This sturdy (and stylish) upgrade now allows the player to control the effect with their feet, whilst retaining tactile efficiency for hand operation. On the inside, we’ve designed a brand new Active circuit from the ground up. Featuring new modes and parameters effectively impossible to attain on the original Stutter.

In addition to the classic Kill and Activate modes, we are excited to present:

Burst mode is an automatic, tremolo-like stutter, adjustable from 110bpm to an astonishingly fast rate, set by the Burst Knob. In Burst mode, the effect can be latched (with a quick press of the key), or triggered momentarily (when the key is held). For the player that would prefer to only have momentary mode, we provide an internal dip switch to turn off the latching feature.

Additionally – emulating aspects of the original Kill and Activate modes – the “Polarity” toggle on the side of the enclosure further enhances the possibilities of Burst mode. When Polarity is set to “Kill”, your clean signal passes through until the key is pressed (engaging Burst). When set to “Activate”, no audio will be heard until the key is pressed, allowing for controlled bursts of sound! You can additionally control the rate of Burst mode externally by an expression pedal, or synced to a CV clock source to match the tempo. To cap it all off, Telegraph V2 features an integrated, power loss fail-safe, inso that if the pedal should lose power, it will automatically revert to a bypass state. This newly re-imagined telegraph pedal serves as a unique and creative tool for both live and studio use. Where rugged engineering meets on-the-fly inspiration!