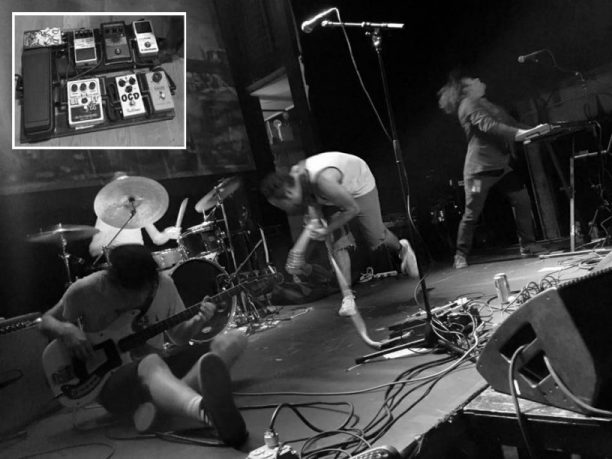 Color Tongue is a spacey, indie-psych rock band hailing from Brooklyn. Their latest release, Sprouts, is 8 tracks of inventive, sometimes atmospheric tracks, that while feeling expansive, ground itself with both its fun and infectious qualities. With such a myriad of different sounds coming from their latest record, we were curious to hear the band talk a little about their creative process, and of course, their gear.

At the time I would say various records from Animal Collective, Deerhunter, Pixies, Weezer. I even snuck a Les Miserables melody in there lol. We get pretty inspired by watching Planet Earth episodes and hanging out with friends. “Social Cues” in particular can be attributed to Eddie never buying his own shoes and just wearing my old ones. Things like that.

Is there a rational conceptualization behind the band’s sound (i.e. are you purposefully trying to achieve something musically), or are you just following your musical instincts?

We’ve always been kind of instinct-based but I think for this next record, we’re looking to hone in on a more singular sound. At least on an album to album basis.

What’s the songwriting/arranging process in the band? To what extent is each band member’s role defined?

Most tracks are written initially by either myself (George) or Eddie, and then brought to the band at practice for them to add their own little flavorings on. Things are pretty democratic in terms of how songs are pieced together.

Are there any instruments, pieces of equipment or musical toys that became signature sounds in the record?

Most notably the many sounds of our dog Thunder haha. We recorded all the vocals in our apartment so there’s a lot of takes with Thunder barking or playing in the background. For the slow breakdown in “Stitches” we sampled his snores for some extra ambiance. 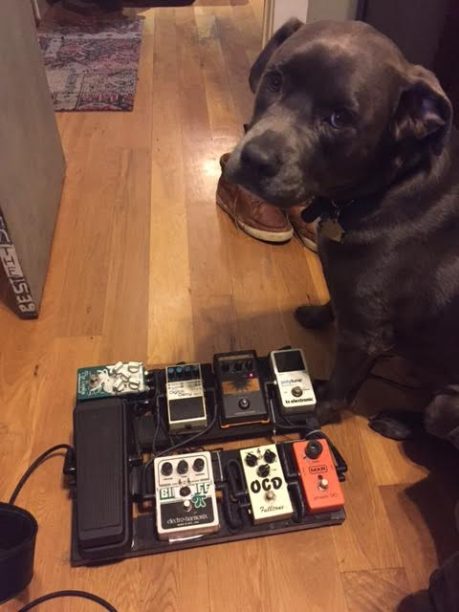 Here at The Deli we like guitar pedals. Guitarist over there, could you send us a picture of your board with the list of the stompboxes on it and a brief description of why you like them?

No prob: starting out you have your essential tuner (TC Polytune) which is cool because you can make a full strum and it will tell you which strings are out of tune all at once. Then we move to the little pumpkin on the right, my MXR Phase 90 (David Gilmour inspired). From there it feeds into my first line of distortion which is the OCD overdrive by Fulltone. I just recently came to the realization that two levels of distortion are fully necessary for our sound. When I’m looking for some more punch, I switch over to the EHX BIG MUFF wicker. Very lush, loud, and lovely. Then it hits my BOSS DD7 delay, followed by the very whirly Earthquaker Depths pedal, a stellar vibe machine. And finally, a Cry Baby Wah. I’m not sure where those are supposed to go in the signal chain but there it is! I also use a TC-Helicon vocal delay… Aaand that’s Thunder in the photo. He was my consigliere on all these purchases. 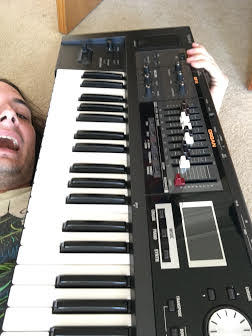 We also like synths – we hear some synths in your music, what are they? Devo-esque intro of “Sprouts” in particular…

Novation Bass Station 2. I wrote a poem about having a splinter that grows into a large forest while you sleep, so Eddie made a synth that sounded like a saw, that would score the emergence of said vine and forest growing from my hand. And Ray plays a Roland VR-09. Here’s how happy it makes him…

What other current emerging NYC bands do you feel like you have an affinity with?

Nice, thanks! We made a compilation of the bands in this list that have their tracks on Soundcloud, check out out!