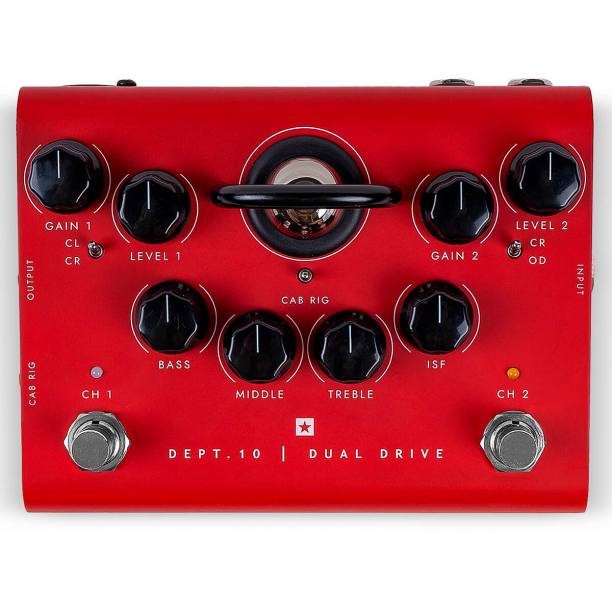 British manufacturer Blackstar Amplification initially made a name for itself for their point-to-point tube amps, and even though they expanded on that initial offer, their experience with tube-driven circuits remains an important part of their identity, as proven by the release of a series of tube pedals under the Dept. 10 series, including the Dual Drive.

Packed with features, the Dept 10 Dual Drive is an expanded, dual overdrive circuit featuring an ECC83 Triode Valve driving 2 voices per channel, for a total of 3 crunch/overdrive voices alongside the clean channel. Channel 1 gives you the option to select Clean or Crunch tone through a toggle switch, while Channel 2 steps things up a notch with Crunch or Overdrive modes.

The EQ section features knobs for Bass, Middle and Treble that are shared by the two channels, plus an ISF knob (based on proprietary technology) that affects the whole tone stack response allowing players to choose the exact tonal character they want:

But this baby is also a USB audio interface that allows you to record directly to your DAW thanks to low latency USB, XLR out, and a proprietary Cab simulator, whose response can be tweaked in detail through a free app. Needless to say, these specs allow the Dept 10 to be employed live as a backup to your amp – or even as an amp replacement.

On top of all that, the pedal’s effects loop allows easy integration into your existing pedalboard.

Check out the tones produced by the Blackstar Amplification Dept 10 Dual Drive in the videos below.

[Wanna get this baby and be supportive? Buy it through our Sweetwater affiliate program – at no extra cost.]

The best valve drive pedal you will ever own and a world-class valve recording preamp – with 3 crunch/overdrive voices alongside the clean channel, our patented ISF control, low latency USB, XLR out and Dept. 10’s proprietary Cab Rig simulator technology.

Dual Drive includes Cab Rig, our next-generation DSP speaker simulator that reproduces the sound and feel of a miked up guitar cab in incredible detail. Deep-dive using the accompanying free software and capture the incredible tones via USB / XLR out or headphones.

Adding to this, an in-built effects loop allows for effortless integration with your pedalboard which when used with the XLR D.I. makes for a great sounding and flexible backup amp.