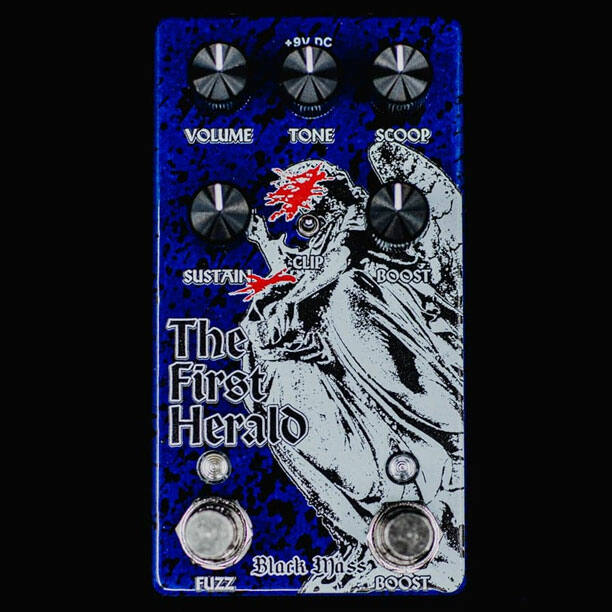 The folks at Black Mass Effects, out of Salem, MA, describe their debut pedal, named The First Herald and recently redesigned to fit in a compact case, as a device that “does not reinvent the wheel, but reinforces it” and also “not death itself, but a definitive statement reminding you that the end, great and terrible, is on its way.”

This is an extremely versatile Fuzz voiced – as you may have guessed – for metal guitarists flirting with the abyss of despair. It features a separate Boost circuit that can be placed before or after the fuzz.  A Scoop knob lets you boost or cut those crucial mid frequencies that define tone and musical genre.

There’s also a Clip toggle switch that gives you the option to engage Silicon or LED/Mosfet clipping – the former darker sounding and less aggressive than the latter.

Take a listen to the Black Mass Electronics The First Herald fuzz in the video below.

Legends always tell of the signs before the end and when otherworldly denizens come to reclaim the earth, you will remember that first moment it felt something in existence shifted. Growling, barking, moaning, screaming, a ragged breath pulled itself through their teeth. The figure opened their mouth, speaking with an otherworldly depth.

A bellow. An utterance. A resonant and foreboding warning of what would come.

The First Herald is a pedal possessed, the first chapter in an apocalyptic narrative. Not death itself, but a definitive statement reminding you that the end, great and terrible, is on its way.

A fuzz/boost pedal, the First Herald isn’t reinventing the wheel; it is, however, reinforcing it.

The First Herald gives you incredible control over tone via an order reverse switch and a scoop knob. The order reverse allows you to ask yourself questions: should the fuzz effect be more prominent?; do I want the signal to hit the amp harder?; do I need more gain to get the tone I’m after? Giving you the option to either run the boost into the fuzz OR run the fuzz into the boost means you can answer those questions for yourself. Meanwhile, the scoop knob gives you the option to amplify or eliminate mid tones in your signal, adding even more versatility to the option pool.