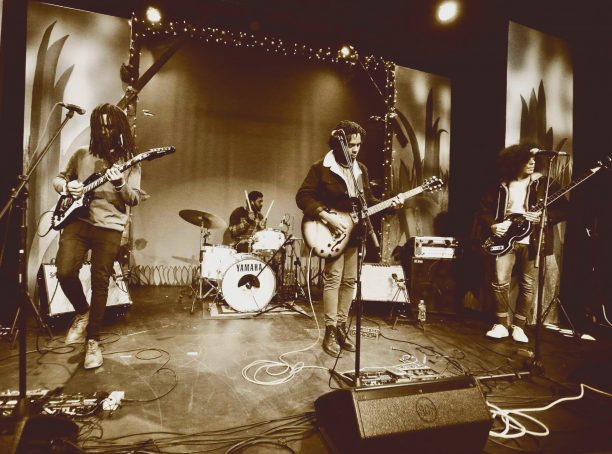 Psych rock is a genre that can encompass a spectrum of sounds ranging from pop-oriented songs to less-defined and at times downright chaotic jams. Risen to semi-celebrity status in NYC through busking in the subway to the tune of songs by the Beatles, Rockaway Beach, New York’s Blac Rabbit create music that falls in the former category, with precise song structures and thoughtful lyrical content. What bridges those extreme ends is a like-minded penchant for phased guitar textures and dreamy introspection. After impressing with their 2017 debut 6 track EP, the band recently released new single “Seize The Day” (streaming below in live version) from their forthcoming record “Interstella,” due out in early 2019. We asked the two brothers at the helm of the band a few questions about their creative process and gear. – Dave Cromwell

What music did you grow up listening to, and did your parents approve?

Amiri and I (Rahiem) listened to a myriad of different artists growing up. Our grandfather is a Jazz musician (an alto sax player), so we listened to a lot of jazz records. Our grandmother loved the Beatles, that’s where our love for them stemmed from.

Our mother has a really eclectic taste in music. She listened to a lot of ’80s pop music which we really enjoyed through high school but she also dug a lot of alternative music from Radiohead, Portishead, and especially Bjork… God I love her! And yes, they approved… at first we definitely had talks about what we were going to do with our lives other than music. It all worked out after the band started taking off though.

You guys became some kind of NYC sensation for busking in the subway, how long did you do that and was it a formative experience for what the band is today?

Busking originated for us as a way to raise money to see our mother in Puerto Rico, she was living there for a while a few years ago. It was only years later after settling in to several dead end jobs, getting sick of them, quitting, and then busking for about a year and a half before it began to blow up for us. Busking definitely sharpened our skills in terms of performing. I think before this experience I would have considered us as producers more than anything else.

What are the role and dynamics in the band during the creative process?

Amiri and I have been writing music for a while before the band Blac Rabbit was a thing. There are definitely things about making music that Amiri and I have gravitated more towards individually. But if I had to simplify things I’d say that I’m like the tech nerd who loves to mix and engineer and Amiri has developed a great ear for chords. I’m the mixing guy, and he’s the songwriting guy!

For me (Rah) drums play a really important role in the way I write a song. The beat often comes before anything else. Also keys are becoming more important, although Amiri in most cases starts composing on an acoustic guitar. We’ve both been kind of forced over the year to become pretty resourceful as writers too so usually we just pick up whatever is capable of making sound in our vicinity and write with that.

Does gear have a role in this process? If so how?

We knew we wanted a “Pshyc Rock” sound so when trying to figure out which pedals we would need to achieve that, we stumbled across these Zoom pedals. The Zoom G2, G3 and G3X. We chose them mainly because we were too broke to afford a shit ton of analog pedals. At first I thought we were settling, but now I think the sounds have grown on us.

Were there any instruments or pieces of gear that were particularly inspiring in the making of your 2017 debut EP?

The Zoom G2 and G3 are multi effects guitar pedals but it’s pretty easy to narrow down the specific effects we use on the EP: Mainly a compressor and drive which adds a sort of mid rangey quality to the tone tone. It does a really great job creating a vintage analog tone without being analog. A delay and reverb combo which nicely washes out a guitar sound makes it sound ghostly, which I really like. And a vibrato modulation. I really like the way that sound warps the pitch ever so slightly.

Is there a person outside the band that’s been important in perfecting your recorded and/or live sound?

For me Steve Lacey and Kevin Parker of Tame Impala have been major influences for getting “the right sound”. I remember listening to Tame Impala and being blown away by the way his record sounded. Finding out that he produced it all on his own was crazy to me and super inspiring. An artist who was just as obsessed with the engineering as the writing resonated with me. I had always been interested production since high school and hearing Steve and Kevin definitely inspired some of the sounds on the EP.

What other emerging NYC artists are you enjoying these days?

Ooo… I have a long list of them. But to be brief, we love Crumb, Diiv and Beach Fossils. We also love some lesser known bands that we’ve preformed with as well like August West and our bass player Josh’s Band: Mon Ame.