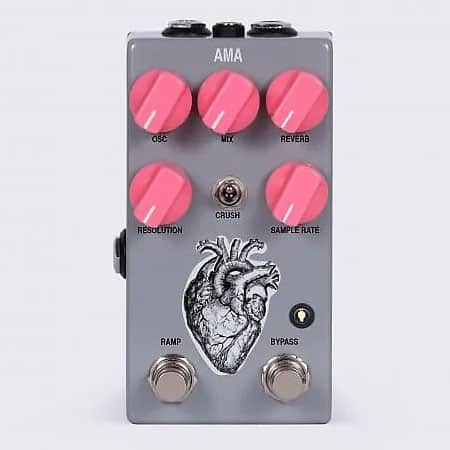 The AC Noises Ama V2 is an ambient reverb followed by a switchable Bitcrusher (Crush toggle) and a modulation section (OSC knob). The Reverb knob balances both the amount of reverb and the length of the decay.

The bit crusher gets things grainy and noisy and features knobs for Resolution (bit depth) and Sample Rate.

V2 was built out of the feedback the company received from users and introduces a MIX knob to reintegrate some of the clean signal, and a completely new, more musical bit crusher. Also, the OSC knob allows to set the amount of oscillation applied on the reverb’s tail, going from no oscillation at all (knob fully counterclockwise) to self-oscillation mode (fully clockwise).

Another new feature is the RAMP footswitch (which replaces the OSC one on V1, which turned on the modulation section). The new knob speeds up the oscillation based on the position of the OSC knob (the lower the setting, the slower the ramping).

Check out the videos of the AC Noises Ama V2, we added this pedal to our articles about the best bit crusher pedals and the best modulated reverb pedals.

AMA is an Italian verb which means “love” in second person imperative (tu, ama! = you, love!).

The first version of this effect pedal was released in early 2018 and it quickly became the top seller of the AC noises catalogue. In fact, during the consecutive two years, the AMA has been chosen from many alternative, post-rock, shoegaze and ambient artists (including some well known ones) and it’s been featured (and mentioned several times) on the gear encyclopedia “Pedal Crush” in late 2019.

This new version (simply marked as V.2) is the result of the feedbacks we received from all around the world during the past two years and it’s been created to provide the most exciting experience to all the sonic adventurers out there who love a gently modulated and oscillating spring reverb in front of a bit crusher.

The AMA V.2 offers up to 4 different control parameters for the reverb (OSC, MIX, REVERB and RAMP) and 2 for the re-worked and now more musical bit crusher which is still placed after the reverb (RESOLUTION and SAMPLE RATE).
Note: About the bit crusher, there is also an internal trimmer which controls the effect’s gate. Anyway, we suggest to leave that as it comes from the factory.

OSC
One of the new features offered by the V.2.
In the first version, the reverb oscillator was only switchable (ON/OFF) and it was strictly related to the decay. Now things have changed: the OSC knob allows to decide how much oscillation has to be noticed on the reverb tail, going from no oscillation at all (OSC knob fully counterclockwise) to the as wonderful as noisy self-oscillation mode (OSC knob fully clockwise).

MIX
The MIX knob controls the balance between the dry and wet signal.
Turning it clockwise, the percentage of reverberated signal will be more noticeable (and viceversa).

RAMP
One of the most exciting feature of the AMA V.2.
The RAMP footswitch is related to reverb’s oscillator and its work speed depends on the OSC knob setting: more closed will be the OSC knob, slower will be the oscillator ramp (and viceversa).

CRUSH
That’s the position of the toggle switch which allows to engage the bit crusher circuit placed after the reverb.

RESOLUTION
The amount of the oscillation pulse. Turning it clockwise, pulses will be wider and signal will be noticed as less crushed (and viceversa).

SAMPLE RATE
Bit crusher internal oscillation frequency.
Turning it clockwise, the oscillation will be more focused on high frequencies and the bit crusher will be generally noticed as brighter.
Another new feature offered by this new version of the AMA is an expression input connected to the sample rate, which allows to bypass the knob and controlling the frequency’s cut by using an external expression pedal (10k value recommended – so most of the expression pedals on the market).