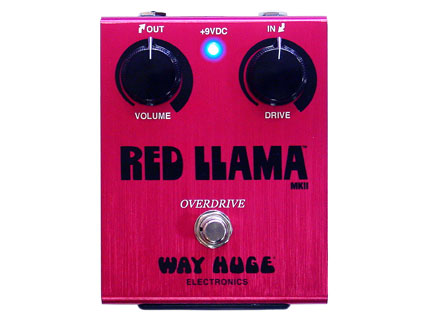 Way Huge’s Red Llama MkII is a simple pedal that does one thing awesomely well: highly musical overdrive/distortion. While the name implies a redesign, it’s more of a second coming. The Red Llama (street $120) is a reissue of what became a highly sought-after pedal after it disappeared in 1999, now resurrected by Dunlop.

The Red Llama is marketed as a “special seasoning” to any amp, and it certainly plays well with even the most temperamental tube amp, while adding plenty of raunch to a solid-state amp. What makes the Red Llama so compelling is how it pairs its meaty growl with abundant headroom. And no matter where I positioned the volume or drive, the Red Llama added a burly muscularity to riffs and chords alike, even when I engaged only the volume and used it as a booster.

While the pedal lacks a tone control, it responds exceptionally well to the guitar’s tone and volume controls. By turning down your guitar’s volume a little, you tame the grit enough to get some serious mileage out of open chords. Simply whack up the volume for lead work and you’ve got two pedals in one.

Genealogically, while it’s on the tasteful end of the spectrum, the Red Llama is the cousin of the fuzz pedal. This kinship has some terrific plusses—its apparent lack of compression is one—but it also means that while the Red Llama is awesome on its own, throw in too much competition to its sonic space and it can get a little drowned out.

However, unless you play in a band with lots of competing mid frequencies, this is a relatively minor concern. I had a blast with this pedal, which certainly earns its place on a pedal board without breaking the bank. — Howard Stock