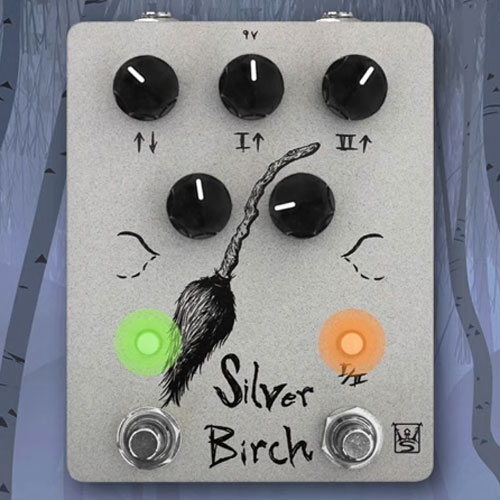 The controls, although non-descriptive, are pretty easy to get: Volume, Gain Stage I (with more of a mid focus) and Gain Stage II (brighter) on the top row and Bass and Treble shelving EQ on the bottom row.

The footswitch on the right switches the relationship of the two gain stages between Parallel and Series: when configured in series, there’s more gain overall and the brighter Channel II is last, tightening up the sound, while in parallel you can get lower gain tube-like drive tones.

Have a listen to the sound of the Swamp Witch Pedals Silver Birch in the videos below.

The Silver Birch is an overdrive with distortion-capabilites that rose from the moonlight, inspired by a number of Model-T clones. From tip to bristle, this dual channel overdrive uses CMOs Hex Inverters to acheive a tube-like sound. Warm and round. Boomy and haunting. Rich and cutting. The options are limitless.

Channel I Gain: Adjust the gain for the low/midrange channel

Channel II Gain: Adjust the gain for the bright channel

Bypass Switch: Turn it off and on again

Channel-order Switch: Switch between Parallel and Series gain channels. In series, Channel II (bright) is last, tightening up the sound.