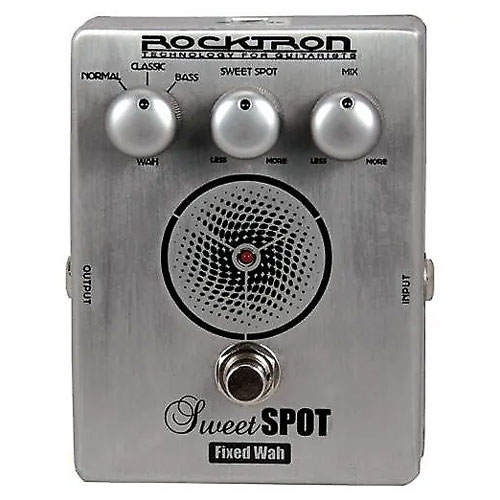 It was November of 1966 when Brad Plunkett was commissioned by Warwick Electronics Inc. to make a substitute for the rather expensive Jennings 3 position Mid Range Boost (MRB) circuit. The circuit was needed after the company had bought out the Vox name due to it’s association with our favorite band from Liverpool. The switch was going to be just one of many elements in need of replacement in the attempt to convert the Vox amplifier from tube to solid state. It was this very circuit that eventually lead to the creation of the effect we now know as the “Wah Wah”.

The “Wah Wah” effect and it’s slew of “Wah Wah” producing pedals can be heard on countless classics and is considered a Rock n’ Rock staple. The pedal up for review comes to us from Rocktron and has it it’s roots in the “Wah Wah” pedal and falls into the specific category of Fixed Wah pedals. It’s aptly titled the Sweet Spot and I was curious to find out exactly how sweet the spot actually is. The layout and case design of this pedal are simple. It’s got three knobs, 1 input, 1 output and being part of Rocktron’s Boutique Series it comes in a rugged medal chassis with laser etched artwork. It feels really solid and has some additional padding on the bottom that may need to be removed and replaced with velcro if you’re using a pedal board. The knobs feel great and are attached to high quality pots that provide the perfect amount of resistance.

The first of the three knobs is a three position selector switch with settings labeled Normal, Classic and Bass. These settings pertain to the type of Wah circuit. Normal mode mimics a modern Wah pedal sound, Classic mode captures the vibe of old school Wahs, and Bass mode is for 7-strings, Baritones, Basses and the like. The second knob is the Sweet Spot knob and it’s function is to select the frequency or “sweet spot” that will be accentuated. The last but certainly not least knob is the Mix knob. The Mix knob controls the balance between wet and dry signal going to your amp. I find the Mix knob to be one of the best features of the pedal because it allows you to dial in just the right mix; something not possible with most Wah Pedals.

The first thing I wanted to do was test out the three modes to hear the spectral differences in tone. Normal mode is supposedly a take on the modern day Wah effect. To my ears it sounded like the brightest option. With the knob dialed to about 4 o’clock you get this great cutting punch that sounds nice with say a blues riff or even a crunchy rock rhythm. It feels a lot like a Presence boost or an Exciter when cranked all the way. Let me just take a moment to say that the settings typically won’t work in all songs and all keys. Since we are dealing with a frequncy dependent effect I found myself constantly tuning the Sweet Spot frequency knob to work best with a particular riff. For instance, you may tune it to add the perfect frequency boost for one solo but the settings would need to be changed to get it to do the same magic for another tune.

Classic mode is the setting that you want if you are looking to mimic our Rock n’ Roll forefathers. I found this setting to be a shade darker and less pronounced than the Normal mode. That said, it’s also a lot less harsh in the 4 to 5 o’clock position and adds a bit of edge without getting too nasty in the 3-5 kHz range. Once again I found myself tuning the Sweet Spot knob to have just the right effect for a particular riff or key. I don’t think I would be much for picking a setting and just leaving it on in my signal chain for the whole set. I may just use it on a particular solo or riff one time in my set. At most I may set it up for one song and then make the necessary tweaks to get it to sound right for a second song but usually I try to avoid pedal tweaking in between.

The last mode named Bass is a mode that was designed to enhance lower frequency instruments such as a 7-string Guitar or a Bass. I had a little fun plugging my Fender Jazz into the Sweet Spot. It definitely added some interesting harmonics with the Spot Spot knob nearly all the way open. I also used it as a pseudo low-pass filter. I achieved this by setting the Sweet Spot knob at about 11 o’clock. When using a pick you get a nice growly tone that would sound really good paired with some bright guitars to add contrast.

Overall, I found this pedal to be pleasantly limiting. I found it to be a very “niche” design, but if you are looking for the Fixed Wah effect then look no further. What really makes this pedal stand out is the Mix knob. Being able to dial in just the right amount of harmonic enhancement is key. I think that this pedal would find a nice home in anyone’s studio. It just begs to be tweaked to perfectly compliment a particular arrangement. If a solo is having a tough time poking through the mix then this little guy could be the antidote. If you use the pedal in the studio you’ll have to slap it on the old pedal board for the tour! Nice job Rocktron, you’ve got a real winner here.