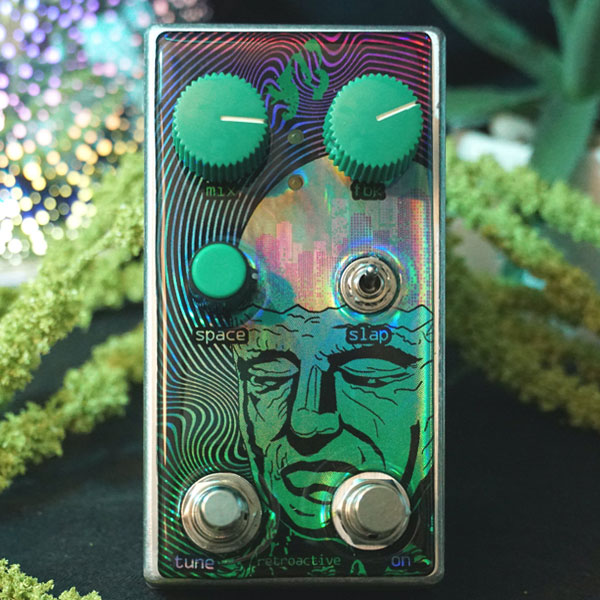 The Diving Bell by Nashville’s Retroactive Pedals is a compact delay pedal optimized for psychedelic use, which is why it made our list of the Best Psychedelic Delay Pedals, but can also deliver a more classic and commonly adopted slapback effect.

Unlike other creative echos, this is not a complicated device, featuring just three knobs, a toggle switch and two footswitches, but the choice of functions here are optimized for self-oscillation and mind-melting pitch-bending.

Based on the beloved and popular PT2399 chip (two of them, for that matter), the Diving Bell gives you two modes (longer or shorter repeats) through the Slap toggle, and starts self-oscillating when the Feedback knob is around 2 o’clock.

However, what makes this pedal stand out is the Tune footswitch, which allows the player to alter the delay’s speed hands-free, creating the classic pitch-bending effect produced by analog delays. (The initial delay’s speed can be controlled via the Spacing knob.

Check out the sounds coming out of the Retroactive Pedals Diving Bell in the video below.

The Diving Bell is a lo-fi delay/echo machine utilizing 2x PT2399 chips, suitable for a wide-range of sounds from psych-rock, country chicken’ pickin slapback, to blown-out shoegaze on the verge of self-oscillating chaos.

Mix – Dials in amount of wet signal from Delay chips

I’ve found my favorite application for this pedal by placing it last in the chain with a volume pedal, compressor, and pitch shifter for a faux pedal steel sound. Using it especially with something like the DigiTech Whammy or Ricochet that has ramping capabilities up or down.

The compressor adds a ton of sustain and depending on your application, the volume pedal can act as a pedal steel as well, or strategically using the pitch shifter as the “country steel” sound. Throw your favorite pedal with an expression out in place of the pitch shifter and see what comes out!