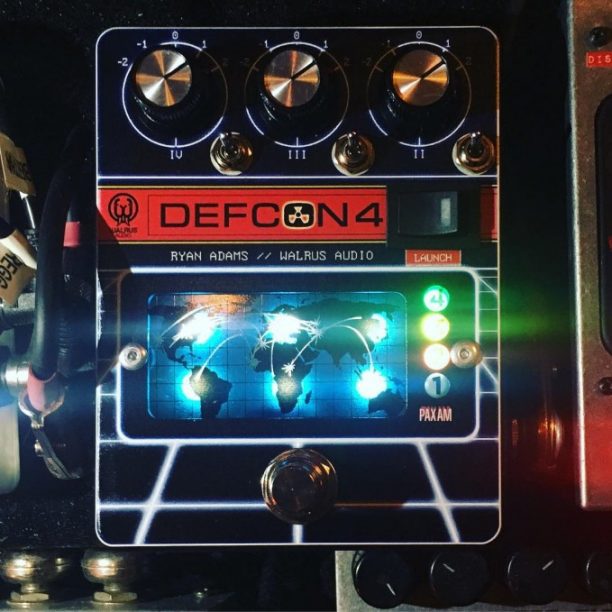 We are a little late with this (file under: vacation interference!) but Ryan Adams in early July posted an Instagram picture of the board he is using for his new record. The photo made pedal geeks balk, since it features the unidentified stomping object pictured above.

This pedal, called DEFCON4, appears to be the prototype of a collaboration between the artist and Walrus Audio.

Named after an alert state used by the United States Armed Forces (4 is the maximum level of alert), it features an image of a world conflict reminiscent of the total war simulation from 1983 sci-fi classic War Games (minute 2.30).

If we were to try and guess what kind of pedal this is, we’d say a triple octave effect, like some kind of modded version of the company’s Luminary Quad Octave Generator. The four lights on the right of the map would then represent the octaves that are on, with “1” being the direct tone. The “Launch” switch would then trigger a special effect reminiscent of the sound of the take-off of nuclear missiles.

What do you guys think?

Previous comments by the artist posted about the pedal seem to have been deleted – EffectsBay has caught them in time, though, and published them.