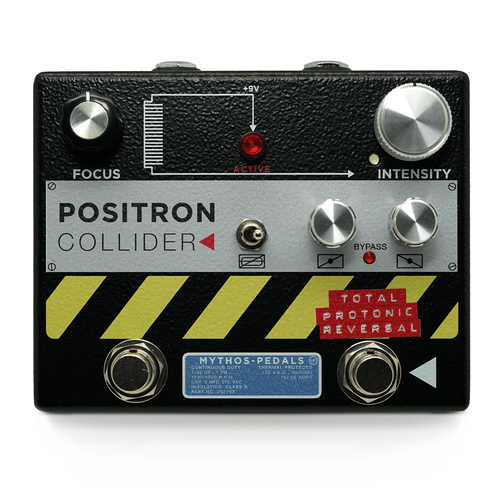 Nashville based Mythos Pedals has quickly built a reputation for their great sounding, hand made dirt boxes, also winning, just about a year ago, our contest for best emerging manufacturer tied to the LA Stompbox Exhibit 2017.

They just unveiled a new pedal that showcases a noteworthy evolution towards more complex designs and more geometrical graphics: inspired by classic sci-fi comedy Ghostbusters, the Positron Collider is a limited edition fuzz box voiced after the Rams Head circuit, but offering a much wider range of tones.

The clipping switch allows you to choose between silicon or LED diodes, while the Total Protonic Reversal footswitch lets you lift the tone stack for extra volume. It also features Treble and Bass EQ knobs instead of the single tone knob found on vintage units

Another Limited Edition pedal inspired by the paranormal catching equipment from the classic 1984 film “Ghostbusters”! The Positron Collider is a unique take on a classic fuzz circuit and offers some unique features you don’t find on your everyday stompboxes. The base circuit began as a classic “Ram’s Head” style fuzz but soon became much more than that.

A unique Treble and Bass tone circuit replaces the single tone knob found on vintage units, these two interactive knobs allow you fine tune the voicing to fit any guitar or bass rig. The Clipping switch allows you choose between classic silicon diode clipping or LED for a more overdriven sound. Fair warning, the LED clipping mode is incredibly loud! The right footswitch engages “Total Protonic Reversal” mode, which lifts the tone stack for a huge boost in volume and shift in EQ for a more full range fuzz tone. The “Active” LED when the pedal is engaged blinks like the classic Ghost Trap and the LED next to the “Intensity” knob lights as you play and it’s brightness is connected to the amount of gain you’re using! This feature and other refinements were done by my good friend and fantastic pedal designer Lawrence Petross (Check out his work here).

All in all the Positron Collider is a Swiss army knife fuzz box that’s so much fun, it’s scary!