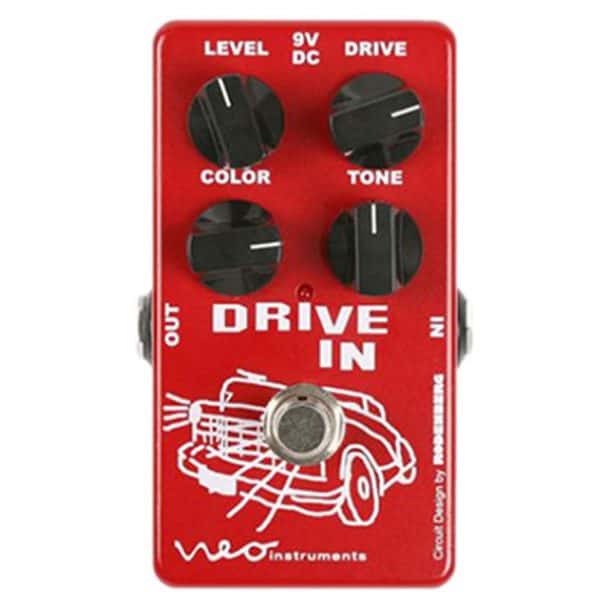 Mike Hermans took a shot at the NEO Instruments Drive In Overdrive in the video below, a rich and nuanced medium gain drive for blues and rock players.

With the advent of the drive in restaurant, the sounds that a guitar could produce changed radically too. They became increasingly louder and more distorted. In the beginning, only the amplifiers themselves were overdriven. Then shortly afterwards the first effects pedals were introduced to the guitar player. This completely expanded the tonal possibilities for the guitarist.

This is the historical connection to the DRIVE IN. The DRIVE IN masters the classic overdrive sounds, and is just as convincing at producing different distortion variations and a considerable variety of overdrive sounds.

The DRIVE IN is aimed at the player who likes a classic overdrive sound when playing blues or rock music. The DRIVE IN is not a high-gain metal distortion unit. It has been designed to appeal to the more discerning player who loves rich, deep smooth sounds that blend wonderfully into the mix and give expression and character to the music.

With the DRIVE IN you can achieve a slight saturation of drive to your sound or a deep distortion full of sustain. In contrast to the usual overdrive pedals currently available, the DRIVE IN not only provides the player with controls for level, drive and tone but with a newly developed COLOR control. Whilst a classic tone control dampens the treble range of a classic overdrive pedal, the COLOR control on the DRIVE IN mostly changes the frequencies in the bass and mid range and thus, gives important access to frequencies that change the character of the sound, adding another dimension to the users experience.