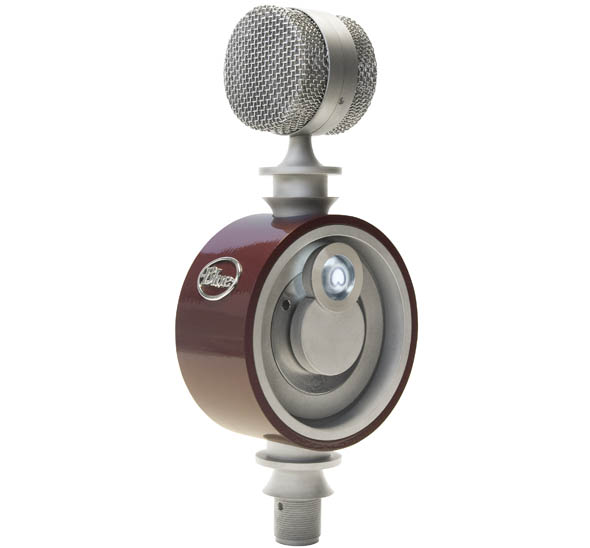 New product news from NAMM 2011: A uniquely-styled multi-pattern condenser from Blue Microphones, and the latest addition to the Eventide stompbox line.

Blue’s new mic, the Reactor, will be available this coming spring for $499 retail. While the mic body could double as a hockey puck, the large diaphragm condenser capsule should look familiar: it’s based on the design of the B6 capsule from Blue’s bottle series microphones. The Reactor features an LED backlit polar pattern selector, and a head that swivels 90 degrees for use in X/Y or Mid/Side applications.

Space is the new reverb stompbox from Eventide, boasting 12 of the company’s signature reverb algorithms with a wide array of sonic options. Parameters are adjustable via the unit’s 10 control knobs, MIDI, or an expression pedal. 100 factory presets are included, and the unit also features tap tempo, instant program change, and a programmable HotSwitch.

“Space features 12 of Eventide’s signature reverb combination effects taken from the H8000FW and Eclipse V4 along with some startling new magic. These unique effects, previously available only in Eventide rack processors, are now available in a compact, roadworthy package. Never before has there been a more dazzling collection of reverb algorithms combined with delays, pitch shifting, tremolo, modulation, and special effects in such a compact and affordable package.”