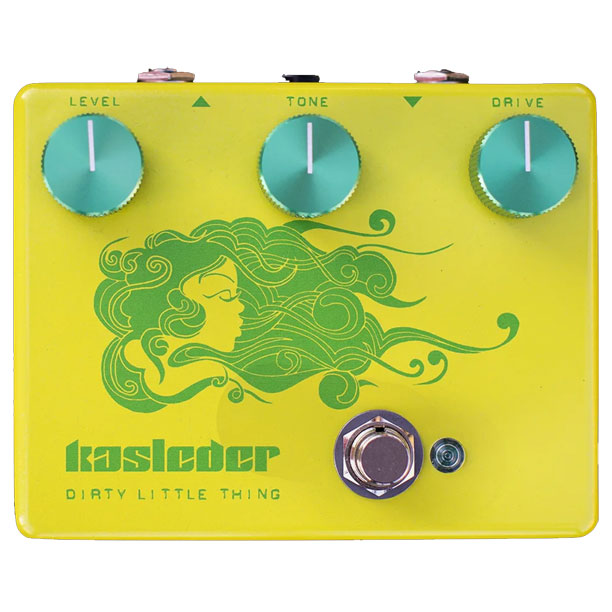 Kasleder FX may not be a company known to the masses, but the German builder has been building high-end stompboxes for over 15 year, and that, alone, makes them a veteran of the pedal scene. The Dirty Little Thing is their take on the Tube Screamer, and it’s celebrating its 15th anniversary in 2021.

With its NOS diodes and NOS carbon comp resistors, this is a recreation of the pedals Maxon used to design for Ibanez in the early days of the Tube Screamer saga (read: TS 808). The limited 15th-anniversary units actually feature an op-amp chip slightly different from the one that went into the TS 808, that were used in the last pre-production run.

We added the Kasleder FX Dirty Little Thing to our article about the Best Tube Screamer Clones and Evolutions.

This is a video of V2 (not the anniversary edition):

Here’s a video of the original unit from the aughts:

We have all been there, trying out countless circuits, and still missing that one simple solution. That’s not the case anymore. A time proven sound with probably the biggest user base of all the guitar effect pedals ever made.

You need a little more Dirty feel for your riffs?
Your rig is missing a Little of that vintage sound?
You need a Thing that can boost your amp for that in your face solo lick?

It is Dirty! It is Little! It is the Thing that’ll make your sound bigger! It’s the Dirty Little Thing.

Some superstitious people believe that the number 13 is unlucky. Let’s prove them wrong with this anniversary edition of the DLT! It has been exactly 13 years since I have been working on to replicate the sound of that perfectly authentic vintage Tube Screamer. Now in 2019 I believe I have put the last pieces of the puzzle in place and my longtime dream have come true.

During the years, I have made a lot of versions of the circuit, but this time my feeling is that I have really hit the target. Dirty Little Thing 2019 it is not a simple clone, it is much more than that. During the development I had to take into consideration to not alter that sound character you have heard on unbelievably so many records, but also to make an improvement on the less preferred features of the original circuit. Unlike in the original, you have now True Bypass, less bass loss, more drive, and on minimum drive setting a totally transparent clean sound. It is not another version, it is a next level.

Building a pedal is a passion for me. Sometimes it is not an easy task to have a functionally reliable product that also has an eye catching visual design. From hunting down the sometimes almost impossible to find parts, to design a good looking product, is a challenging adventure for me.

Matching the paint color of the box with an awesome logo design, and finding the knobs that will go the best with it, wakes up the visual artist in me. Digging out from the endless components vault those perfectly clipping diodes, the best opamp, spicing up the sound with the components and designing the most perfect functioning layout, satisfies the engineer that I am as profession.

Besides the visuals and the engineering there is one more very important factor in the picture. I am a musician like yourself too, and I will build the pedal with my own hands for you, just like it was for myself.

As for the components in the pedal. To find the vintage sound, I have used NOS diodes previously not used by any other builders in the tube screamer circuit, NOS carbon comp resistors in the audio signal path. To improve on the circuit, Made in Japan 4558 opamp, Wima high-end audio and Nichicon gold series caps.

The frequency response of the circuit is well known. It is exactly what you want to bump up the sound of the guitar from a busy mix. From blues players who want to have a bit of grit to the clean sound, to metal guitarists boosting an already driven amp, with tight lows and pushing middle frequencies. It’s all there. The tube like overdrive sound, smooth clipping distortion, the sustain you need for your solos. The legend!