Born in Boston as the project of singer-songwriter Ella Joy Meir and guitarist and composer Asher Kurtz, Iris Lune is now a Brooklyn based quartet that plays expansive, mellow pop with ambient influences and jazzy inclinations. Their complex layered musical compositions had us itiching to learn a bit about their process and the array of gear they use to create their sounds. – Olivia Sisinni

Can you tell us a little bit about how you all found each other and came together?

Ella: We all met in Boston a few years ago. Asher and I met at a video shoot and fell musically in love right away. I remember walking back from Allston to Back Bay in the middle of the night and just talking about our lives and passions. After that, we met a couple of times to improvise and write together, and it was clear that there was a very strong connection there. Asher told me that I should call him if I ever started a band… and so I did. Aaron was with us from the beginning, and after a while, Angelo joined as our drummer. It’s amazing to see how much we’ve grown together, it really feels like family.

Aaron: I’ll never forget the day I met Ella at Asher’s apartment. Asher and I had already played a variety of styles (jazz, hip-hop, metal) together, so when he invited me over to talk about a new project he was very excited about, I was intrigued but didn’t know what to expect. The three of us chilled for a bit and Ella played some of her songs. I was floored. She had an understated but captivating vibe, and I could tell she was very passionate. Back then I was in my last year of college and was looking at moving to LA to be a session/touring musician, but since that day at Asher’s, I took on the possibility of building something from the ground up with a musical family, and haven’t looked back!

Your more recent material seems to be a bit more poppy. Was that a conscious shift in music-making, or was the track the result something more organic?

To me, good Afrobeat grooves are consistent to the point of being meditative, and never get old because there’s always something quirky in the rhythm that allows momentum to keep propelling forward.

Angelo: I think it’s definitely more organic. All of us in the band have matured and refined our musical tastes, I believe that Sewing Skylines to Shores accurately represents our true sound at this point in time. We hope to constantly grow as people and as musicians, and I think our new sound is a reflection of that growth that took place over the last couple of years.
Aaron: I do think that we’ve grown musically but also in terms of our trust in each other, which has brought an open-mindedness to sonic choices. This new EP has both pop and experimental (there’s an aggressive, epic guitar solo) elements that would have probably been vetoed on the first EP.
Asher: After the first EP, we realized that something we wanted to do more is just groove. We wrote the core of this song during an improv on a chord progression and rhythm I came up with. I had been playing a lot of Afrobeat music at the time so asked Angelo to try something with more of that vibe on the drums. To me, good Afrobeat grooves are consistent to the point of being meditative, and never get old because there’s always something quirky in the rhythm that allows momentum to keep propelling forward. Obviously, the Afrobeat groove didn’t stick, but the entire song is based around the same rhythm and chord progression. This idea of consistent grooves and developing a single musical idea throughout a song was a turning point for us.

The band’s last release, the self-titled EP, is such a dynamic work. What were its greatest influences? What do you hope the EP conveys to the listener?

Ella: This first EP is a lot about letting go, whether it’s of a relationship, fear, something you thought you had, misconceptions or things that hold you down. The chorus of “Bring Me the Moon” sings ‘If you bring me the moon, darling / I’ll sing you the sky / Bring me the lune, dear / I dare you to try’. To me, these four lines are the essence of what we’re trying to accomplish as a band, as musicians. It’s an open dialogue between us and the audience and within ourselves. It’s opening a hole in the sky and letting the possibility of magic happen. At the end of the day, it’s all about stories and emotional processes. Different songs can touch listeners in different ways, which is a really exciting concept to me, but as long as the final tracks stay true to the emotion we’re trying to convey… that’s a good place to be in. I think that’s what ties all the tracks on the EP together. It’s true that they’re very dynamic and varied but the emotional intention is consistent throughout. Is there a single piece of gear that you think is Iris Lune’s secret (or not so secret) weapon? 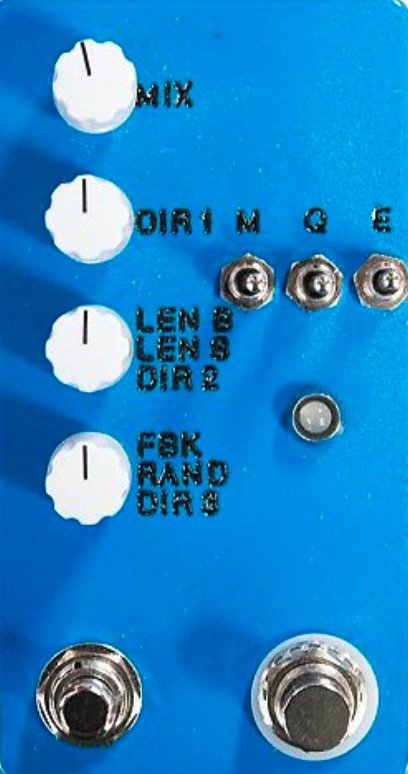 Aaron: Yes, hot sauce.
Ella: Hmm… tough question. It changes every now and then, but to me Asher’s Organelle (by Critter and Guitari) has been a game changer. It’s so easy to sample with, and he’s created some incredibly unique sounds with that piece of gear. Sampling is a huge part of our soundscapes, and it always feels more natural to sample with a hardware sampler rather than on a computer. It’s kind of like having an extension of your body and mind. The fewer steps between an idea and its realization keep things more fluid and organic.
Asher: For me, The Organelle has been the biggest game changer for sure. Second runner-up, the Montreal Assembly’s “Count To 5” has definitely helped to create some unique tones and textures.

Synths obviously put their mark on Iris Lune’s sound. Could you give us a
rundown of what synths you currently use?
Ella: For live shows, I use my Nord Stage 2 (mostly the synth section). I also own a Minilogue, which I’m currently working on incorporating in our set, and an OP-1, which is such an intuitive and inspirational piece of gear.

Aaron: I’m a Moog-head and swear by my Sub 37. From time to time my Roland Aira System 1 will make an appearance onstage for other colors.

Asher: Live and in the studio I use the Critter and Guitari Organelle. I love it. In recordings, I also love to use my Korg Volca Keys, Arturia MicroBrute, Casio MT-35, and most recent addition, the Dave Smith Mopho x4.

Have there been any non-band members that have been pivotal in developing your live and recorded sound?
Angelo: Dalton Harts has been producing our music since our first EP that came out in 2015. He also produced two songs on our upcoming EP including “Sewing Skylines to Shores”, and he mixed the whole thing. Zubin Hensler from The Westerlies also produced two tracks. Live is mostly the band figuring stuff out, although we often use studio elements and sounds that come from those guys.

Aaron: Exactly. Our live sound comes from just playing the songs so much and mixing them up here and there. The way we play the songs off our self titled EP has changed a lot over the years from all the chances we’ve taken. We recently arranged a 4-part vocal harmony for “Surfaces” that we used as a live intro!

Asher: Aside the others mentioned already, Rafiq Bhatia (guitarist from Son Lux) and I have become closer over the past few years. I’ve definitely respected him and how unique his approach is. On one of the songs from the EP we’re going to release I took a guitar solo that has some pretty wacky sounds. When I was recording the solo in my bedroom, I hit up Rafiq for advice on how he approached some of his solos on Son Lux records which was really eye-opening. We nerded out for probably an hour and a half on the phone just talking about pedals, amps, and recording techniques. He’s a wealth of knowledge and chill vibes.

How does your setup for live playing differ from recording in the studio? What are the biggest hurdles involved in playing live?

The goal of playing live isn’t to match the record as closely as possible, but rather to take advantage of visual aesthetic and the intimate energy with the audience to create an experience and hopefully expand upon what is on the recording.

Angelo: I’d say the most difficult part about the live show is getting the performance to sound as good or better than the record. All parts of our recorded music are tracked separately, so preparing them for a concert is drastically different than recording them.
Ella: There’s always the question of which elements to keep from the recording, and which ones to change. We obviously want the songs to sound as good as the recordings if not better, but I think it makes it much more exciting for the audience, and definitely for us, to mix things up a little. If I want to hear something exactly the way it is in the album, I’ll buy the album. When I go to see a live show I want to get something extra, something I didn’t expect. Surprise me, move me, challenge me, make me feel something I didn’t expect to feel. I feel that when we work on our live set, we constantly ask ourselves questions about what the foundation of the track is and which parts of it are more fluid. It’s really hard to do this sometimes, but as an artist, I think it’s essential to keep things fresh and never get too comfortable.
Aaron: Great question- playing live and playing in-studio are different beasts – both are aimed towards conveying an experience, but with recording, you want to create something that listeners can come back to and keep discovering new layers, whereas certain nuances that require headphones or super hi-fi speakers to translate can be spared live. The goal of playing live isn’t to match the record as closely as possible, but rather to take advantage of visual aesthetic and the intimate energy with the audience to create an experience and hopefully expand upon what is on the recording. We tend to bring more versatile setups that can cover the ground we need for it to do so.
Asher: To add to what’s already been said: In the past, there’s usually been a 3 step process with the playing of our songs. We write the song and play it out for a while with small things changing show to show, record it and produce it until it sounds interesting to us again, and then play it live after we’ve achieved this new perspective and have more production elements to mess with. The fun part is boiling the song down to its essence and realizing all of the possibilities of where it can go.