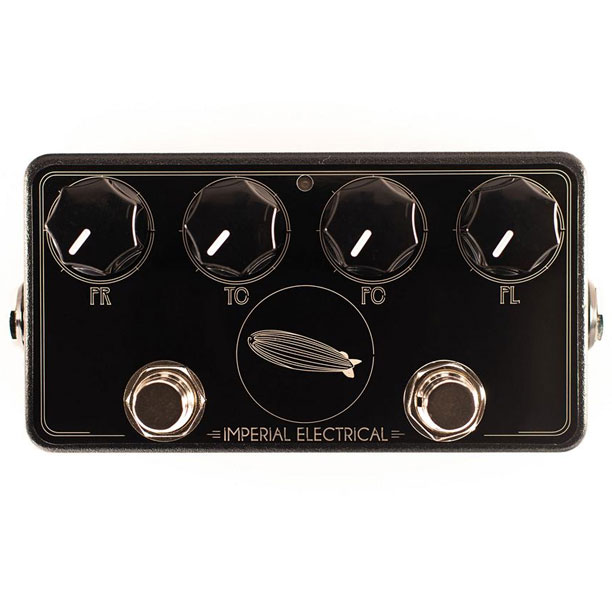 As you may have guessed from the name, the Imperial Electrical Zeppelin is an amp-in-a-box inspired by the immortal guitar sound of Led Zeppelin’s Jimmy Page, built by a new company hailing fron New Zealand founded by Ben Fulton of Red Witch Pedals.

This pedal distills the sound of the guitarist’s Les Paul going into an EchoPlex preamp feeding a Plexi amp, with its harmonically rich and focused tone.

There are separate controls and footswitches for the preamp and amp, with the former having a simple gain knob and the latter – modeled after a 60’s Marshall amp – featuring Pre-Gain, Tone and Master volume.

Cleverly, an LED light on the top center of the pedal will inform you what channels are on by changing color: green when the preamp is on, red when the Plexi-style drive is on, and yellow when they are both on.

Here’s the video Ben shot at our NAMM 2022 Stompbox Booth. We added the Zeppelin to our article about the best Plexi-style overdrive pedals.

From the mind and soul of Ben Fulton, boutique pedal master and designer/owner of Red Witch Pedals, comes perhaps his crowning achievement.

Zeppelin captures the sound and feel of a time when guitar gods ruled the airwaves and arenas all over the world. Combining the tone of an Echoplex preamp going into a Plexi, Zeppelin recreates the sound and fury of a bygone era in a compact pedal at home in any guitarists rig.

Versatile, visceral, and focused, Zeppelin creates an artistic soundscape of past glories and sounds yet to be discovered. More than a drive, more than a boost, more than a preamp, Zeppelin combines these essential elements in a reactive, easy to use, package. From subtle tonal shading to full-on bombast, Zeppelin provides a platform for conjuring the sounds of yesterday and tomorrow.

Let the hammer fall and the gods rejoice-Zeppelin has arrived.