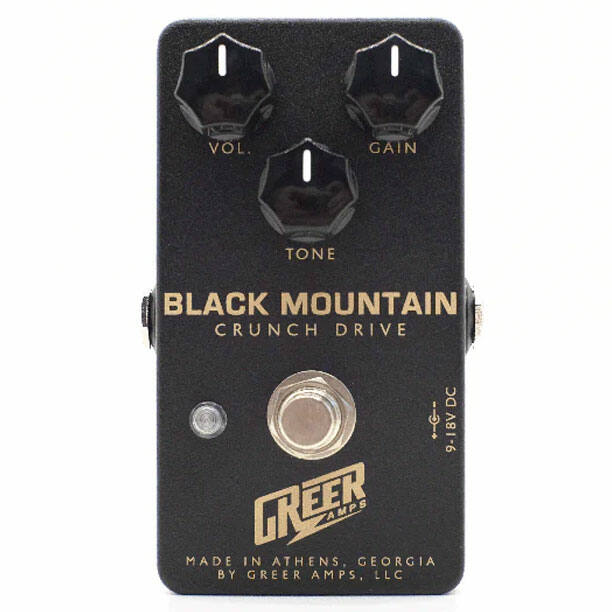 The Greer Black Mountain is a new, British-style crunch overdrive by a Georgia-based boutique builder with a growing following, mostly because of the Lightspeed overdrive, a true “sleeper hit” of the stompbox industry.

While the Lightspeed is a very transparent drive, the Black Mountain offers a definite tonal flavor reminiscent of the British amps, with their mid-range emphasis and crunchy saturation, inspired at least in part by the post-Plexi era Marshall amps, also known for their metal panel, and the guitar sound of The Darkness’ 2003 album Permission to Land, which, apparently, was constantly in rotation while the Greer team was working on this circuit.

Check out the demos of the Greer Black Mountain below.

Looming large, like the towering behemoths of full stacks of yore, the Black Mountain Crunch Drive roars to life, bringing new dimensions of vintage tone to guitarists (and bass players, too!). This new crunch based drive is rooted in a tone quest for the sound of one particular recording of a crunchy British amp, but it has flexibility beyond just that sound. From simply adding crunch, to getting that famous midrange snarl and growl of those metal panel amps that came out just after the plexi era, the Black Mountain Crunch Drive gives up the goods in a way that has a natural, amp like crunch to it. This circuit was inspired by many conversations with many friends, and developed with The Darkness’ album Permission to Land blasting in the background…it’ll get ya there, if you want it to. The two clipping diodes responsible for the drive in this circuit are purposefully imbalanced, selected to impart the proper texture and crunch for this circuit.

The Black Mountain requires a standard negative center 2.1mm power supply, and can run off of anything from nine to eighteen volts DC.

Giant stack based CRUNCH drive!
Midrange snarl and texture like giant old stacks of yore!
Can be powered by 9 to 18 volts!
5 year warranty to the original owner!
Pedals are currently built to order, and will ship within 1-2 weeks of your order and payment!