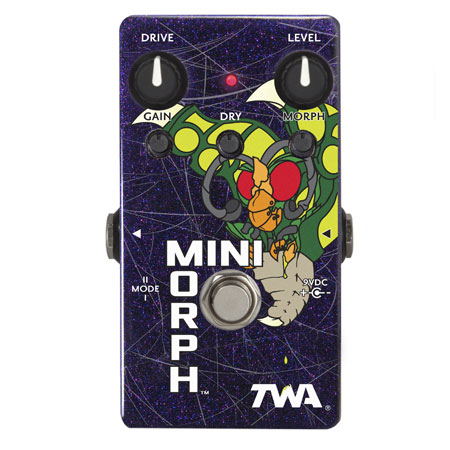 At our NAMM 2018 Stompbox Booth, the guys at Totally Wicked Audio (aka TWA), showed us the prototype of an then-upcoming pedal called Mini Morph – see video at the bottom of this post. Almost one year later, the pedal is finally ready for shipping.

This is a stripped down version of their flagship Dynamorph, a dynamically responsive envelop controlled fuzz, without the actual envelop section. But although stripped down, it’s still a pedal that lets you do a lot of different things. You can get a sample of the sonic possibilities in the video below, and find more information at the bottom of this post and here.

The larval offspring of our mind-melting DynaMorph®, the MM-01 Mini Morph™ features an envelope-dependent drive circuit where the amount and type of saturation is intricately & inextricably linked to the input signal level. Multi-layered, highly complex waveforms meet & morph to create sizzling, splatter-full effects bordering on the bizarre.

We took the original DynaMorph® circuit & stripped out the envelope-controlled level section to create a pint-sized powerhouse that’s simple to use yet can create cascades of cacophonous creativity.

Depending on control settings and playing technique, the Mini Morph™ can create an almost unlimited variety of filthy, flittering filter effects that will add depth and dimension to your notes.  Tight chirps, greasy gurgles, & long, yawning sweeps are all available by simply varying your picking attack.

A light touch with low Drive settings can yield sagging, fuzzy burps that reside somewhere between a “starved voltage” fuzz and a dirty Moog filter.

Digging in hard with higher Drive & Gain settings will bury your notes under a torrent of waveforms battling for evolutional supremacy – the victor finally blossoming into a screaming, searing siren-song.

If things are getting too out of control, a Dry Blend control allows you to add in some clean signal to bring back low-end note definition and articulation.

All of these tonal transformations can be further adjusted via the side-accessed Modeswitch that selects between two different overall EQ settings for the MM.

At the heart of the MM-01 MiniMorph™ circuit is a string of full-wave rectifiers.  In front of this diode array sit two high-gain preamps set in series – the output levels of these pre’s are controlled by the Drive and Gain controls accordingly.

As the diodes are hit with increasing signal level from the preamps, they bias either positive or negative, or not at all.  The resultant waveform is a combination of many, including sine, triangle, square, and interactions of all of these.  The more level that the diodes are hit with, the more non-linear and wackier (technical term) things will get.

This primordial harmonic soup is then passed along to an op-amp that sums it all.  However, since these distortion events are non-linear in nature, there is also subtraction, which yields further tonal filtering and changes to the waveform output.

GAIN – Controls the output level of a high-gain preamp that sits before the rectifier array in the circuit.  Gain makes the Drive control hit the rectifiers harder – a lot harder.  When this occurs, more complex, thick harmonics with compression and increased sustain are some of the results.  Turn Gain clockwise for more gain/distortion/filtering/morphing effect.

MODE – Accessed via a hole on the left side of the chassis, this switch selects between two different overall EQ curves for the effect.  One is fuller-sounding, while the other has more emphasis in the high frequency range.