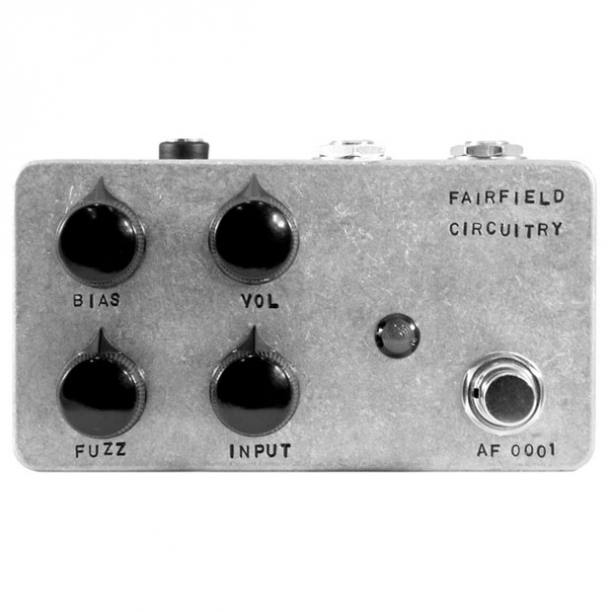 Based, like its predecessor, on two JFET gain stages, this is an aggressive fuzz with a ton of gain and able to deliver a wide range of sounds through its multiple internal gain stages: from high-headroom cleans, to thick walls of fuzz.

The Input knob is based on a “mu-amp” design and sends your signal into the first gain stage, then the Fuzz knob controls the level going into the second gain stage, whose saturation symmetry is controlled by the Bias knob; this can create interesting gating effects at high settings. The Vol(ume) knob sets the output level and can push a lot of volume as well.

Hear the tones produced by the Fairfield Circuitry ~900 Fuzz in the videos below.

You can order this pedal from Perfect Circuits here.

And when things are combined, is anything lost? And when something is lost, will there ever be more?

But what is the gain?

The ~900 is a ferocious fuzz pedal featuring two cascading JFET gain stages. Tracing its lineage back to our discontinued Four Eyes Fuzz, it offers a very wide range of gain, adds delicious harmonics and, if given the opportunity, will slap the ice cream cone right out of your hand.

The four highly interactive controls are:

~900—About Nine Hundred—from Fairfield Circuitry is a versatile, vicious fuzz pedal in a compact form factor. Based on a similar fuzz circuit as the discontinued Four Eyes Fuzz, ~900 has two JFET gain stages that annihilate your signal in the best way, giving you access to astounding amounts of gain. Across just four knobs, you get a wide array of sounds from high-headroom clean, to thick walls of fuzz. Input is your first center of control and is a “mu-amp” design going into the first gain stage. Fuzz controls the level going into the second gain stage and is deeply dependent on the Input. Bias adjusts the second gain stage’s saturation symmetry and can create interesting gating effects when turned up loud enough. Finally, the Volume knob controls the overall volume and has a lot of gain.