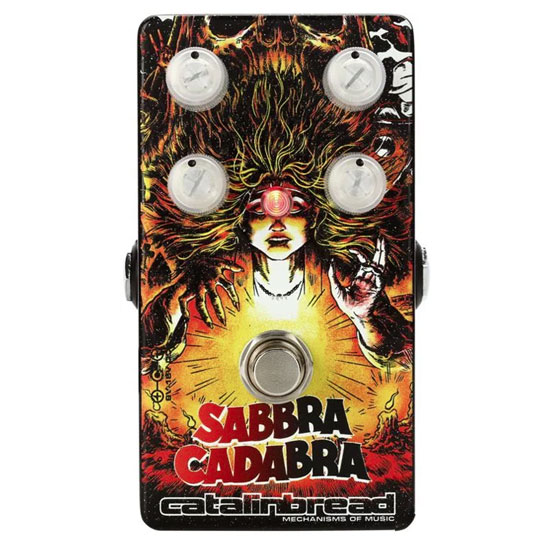 Buy it on Sweetwater.com

Guitarists into Black Sabbath should take note of this limited edition version of the Catalinbread | Sabbra Cadabra, an overdrive pedal that simulates the tone of that band’s lead guitarist Tony Iommy.

The Sweetwater exclusive features a beautiful illustration that’s at once satanic and sexy, inspired by Black Sabbath’s 1973 Sabbath Bloody Sabbath rehearsal sessions at Clearwell Castle in the UK.

If you’re a fan of Black Sabbath and the classic Tony Iommi tone that defined their landmark early albums, the Catalinbread Sabbra Cadabra Clearwell Edition Overdrive Pedal is an absolute must-have. Only available at Sweetwater, the Sabbra Cadabra packs all the patented sinister tone that the iconic guitarist dialed in by way of a late-’60s Laney Supergroup preamp and legendary Rangemaster Treble Booster and puts it into one pedal! One stomp on the Sabbra Cadabra and your electric tone goes from clean and light to doomy and dark, just like that. Plus, this pedal features equally sinister custom graphics that tie into Sabbath’s mysterious sessions for 1973’s Sabbath Bloody Sabbath album. Take it from the legions of metal and heavy rock guitarists here at Sweetwater: this is the stompbox that can take your tone to places that satisfy both your ears and soul.