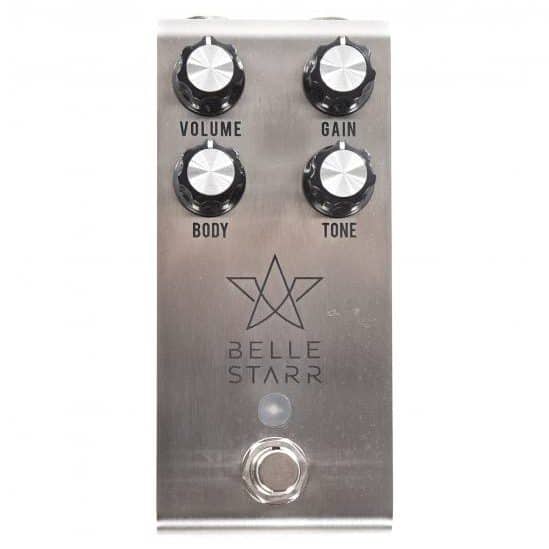 The Jackson Audio Belle Star is an overdrive born from the collaboration between the Huston based company and Drew Shirley from the band Switchfoot, a guitarist known for using small, low-wattage amps.

To recreate that signature sound. the Belle Star relies on an original, MOSFET-based clipping circuit that delivers low/mid gain overdrive with a smooth and natural breakup.

The controls are very straightforward, with Body being an active EQ affecting the lows (+/-15dB) and Tone passively controlling the high frequencies like a cut low pass.

Here are some videos of the Jackson Audio Belle Star.

The BELLE STARR is the result of a several months-long collaboration with Drew Shirley from the band Switchfoot. If you’re familiar with Drew’s rig, he has always run super small, low-wattage amps, and run them wide-open to get his signature overdriven sound. The BELLE STARR was designed to recreate these tones.

Not a high-gain overdrive, the BELLE STARR is a low/mid gain overdrive circuit that has the smooth and natural breakup that is characteristic in smaller, non-negative feedback amps.

The overdrive range on the BELLE STARR is so evenly spread out across the range of the GAIN control that it goes from absolutely clean to medium gain with no unusual jumps in the dynamic response.

Over the 8 months that we spent dialing in the BELLE STARR, we have tried it with every variation of amp we could get our hands on. Fender, Marshall, Vox and of course our own Jackson amps. This was done to ensure that the BELLE STARR would work on any amp that you marry it to.

We are very proud of the work that we have done with Drew and believe that the BELLE STARR is a dynamic, expressive and natural sounding overdrive that will fit perfectly into any rig!

BODY CONTROL
An extremely powerful active EQ, the BODY control adjusts the low frequencies by giving a +/-15dB boost/cut to those frequencies. The BODY control also features a center detent which makes it easier to get back to a neutral or flat response.

DC INPUT
The BELLE STARR can safely run from 9V-18V DC (center negative). Running it at 18V will give increased headroom and dynamic response. Do NOT exceed 18V!

GAIN CONTROL
Controls the gain of your tone and how overdriven the BELLE STARR is. Running the GAIN control low and all other controls at 12:00 will result in a transparent boost that is indistinguishable from your clean tone. Increasing the GAIN control from there adds subtle overdrive and will take you from clean to a perfect emulation of a cranked small amp that is breaking up!

TONE CONTROL
A beautifully voiced passive tone control, the TONE control adjusts the treble frequencies much like the CUT control on a Vox amp. The TONE control also features a center detent which makes it easier to get back to a neutral or flat response.