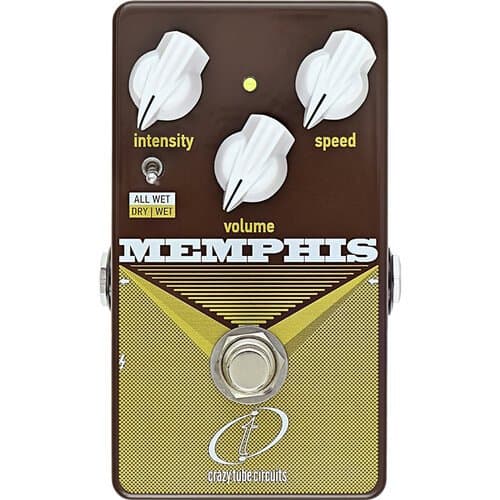 Guitar geeks can go on for hours discussing the subtle differences between vibrato, chorus and tremolo, but they all seem to agree that the vintage Magnatone amps’ modulation effect had something truly magic to it.

Greek pedal builder Crazy Tube Circuits just unveiled a new pedal that recreates that magic in a small, three-knob stompbox, the Memphis. The circuit already existed, mixed in with a drive, in the company’s Killer V (which also emulated the overdrive produced by a Magnatone amp), released in the summer of 2020.

The circuit consists in an…

This is a pretty straightforward pedal with three knobs (Intensity, Speed and Volume) and an All Wet/Dry Wet toggle switch, so it’s really all in the tone – which you can hear in the videos below.

Memphis was designed as the “small brother” of our Killer V. Lots of our customers have asked for a true pitch shifting amp-like vibrato pedal, without the drive section, and we delivered.

It features all analog LFO and true-to-the-original-amp 2-stage pitch shifting circuit powered from an internal voltage multiplier for high headroom and improved dynamic response. A clean period correct preamp with up to 20db boost takes you back to the late 50s / early 60s.

With the intensity and speed knobs you can add a subtle shimmer , or a pronounced 3D acoustic image and musical feel with ear- pleasing vibrato effect for instant classic Lonnie Mack / Robert Ward sounds!

ALL WET – DRY / WET toggle switch selects between 100% modulated signal or places the dry unmodulated signal in parallel with the modulated signal. The latter setup was found in some of the original amps through “stereo” inputs and yields whirling phaser / vibe sounds.