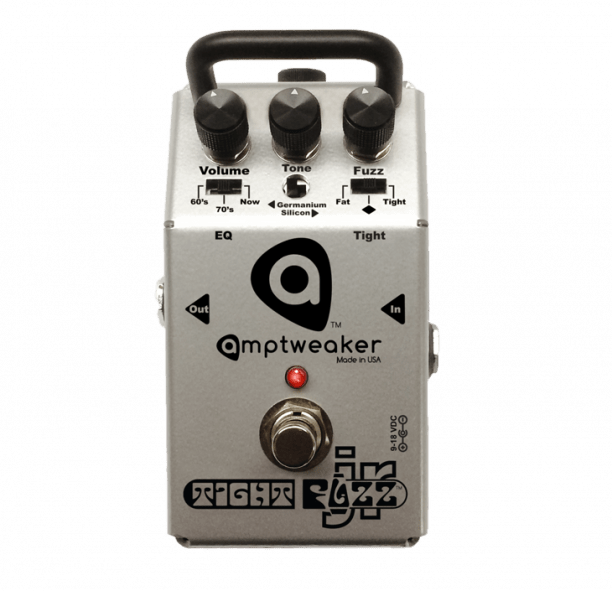 However, designer/CEO James Brown doesn’t disdain slightly simpler designs that can fit in compact cases, and almost every “Pro” version in his company’s roster has a streamlined “Jr.” sibling, which only includes the most popular features, like the new TightFuzz Jr.

The TightFuzz Jr. gives you access to three Fuzz tones (Fat/Normal/Tight) and three fixed EQ settings mimicking the fuzz sound of the ’60s and ’70s (there’s also a “Now” option for a more current sound).  On top of that, a central switch lets you choose Germanium or Silicon clipping for warmer or brighter distortion.

And then there’s this happening under the hood:

Our popular automatically adjusting bias on the Fuzz controls keeps the sweet spot at hand, and is especially nice for cleaner tones.

All Amptweaker fuzz pedals have a built-in ‘guitar-style’ impedance, which allows you to put any other pedals in front without the traditional issues associated with vintage fuzz pedals.  That means it works fine with low impedance active guitar pickups too.

So you are actually alsospared from some not-so-fun tweaking!

Here are a few demos of this pedal:

The TightFuzz Jr is a very flexible fuzz pedal, with a Silicon/Germanium transistor switch and Tight attack switch.

With the popularity of Amptweaker’s smaller footprint JR series, we’ve added bass and guitar versions of our Fuzz pedals….introducing the TightFuzz JR™. These pedals share most of the tone-tweaking features available on their larger counterparts, while eliminating effects loops, lit controls, battery switches and boost features that some players don’t need in order to shrink down the size and weight.

Derived from our Pro series, the Tight control and Fat switches were re-configured into a 3-position Fat/Normal/Tight switch to dial in the attack of the notes from thick and heavy to aggressive and chunky. On this model, an EQ switch provides 60’s, 70’s, or a new setting called ‘Now’, which is dialed in for more modern fuzz tones.  And there’s even a Germanium/Silicon switch to change the output transistor for warmer or brighter/high gain distortion.  Our popular automatically adjusting bias on the Fuzz controls keeps the sweet spot at hand, and is especially nice for cleaner tones.