The world of pedal manufacturing is ripe for trailblazers. You can count Meris among them. The company makes a small but versatile range of pro-audio-quality stompboxes that offer a fresh and invigorating rethinking of what can be done with reverb, delay and circuits derived from synthesizers.

That sort of approach isn’t surprising when you consider that Meris was founded by hardware and software engineer Terry Burton, who previously launched the innovative boutique effects maker Strymon.

“We don’t do surveys or try to follow market trends; we just do what we want to do, and hopefully people like it.”

Burton left Strymon at the end of 2012 to create Meris, where he originally put his focus on high-end audio components designed for modular 500 series studio processors. The company’s debut product was the 440 Mic Pre, an innovative module optimized for guitarists and effect pedals.

He was eventually joined by Angelo Mazzocco, who was previously DSP engineer to the stars at Line 6, where he created unique instruments and DSP code for Eddie Van Halen, the Edge, Dweezil Zappa and others. Rounding out the Meris team is creative director Jinna Kim, who was the talent behind Strymon’s successful brand identity and design.

From the 440 Mic Pre, Meris expanded its 500-series line with two new modules: the Ottobit bitcrusher, a box of bit- and resolution-reducing fun inspired by vintage gaming consoles; and the Mercury7 Reverb, the first 500-series algorithmic DSP reverb module, which offers a stunning recreation of the atmospheric effect heard in Ridley Scott’s classic 1982 film, Blade Runner.

“Our philosophy has always been to just do whatever tickled our fancy at the moment, follow our current inspiration,” Burton says, explaining the company’s product line. “We don’t do surveys or try to follow market trends; we just do what we want to do, and hopefully people like it.”

Of course, there’s no way you can keep those kinds of wild effects locked up in the studio. Despite the company’s focus on pro-audio gear, Burton was eventually persuaded to offer his effects in the stompbox format.

“A lot of synth players use pedals, but not a lot of pedals are built to their specifications,” Burton says. “So we built in the higher headroom for vintage synths, which have a higher output.

“We kept getting requests to make effects that were usable outside of the studio environment,” he says, “so we decided to kind of adapt some of them for live use. The Mercury7 was adapted more to guitar, and the Ottobit was kind of re-engineered completely for guitar and synths.”

Notice the inclusion of synthesizers in the Meris world. Though pedals are traditionally regarded as tools for guitarists, they are also beloved by synth players, a point that’s not lost on Burton and Mazzocco, both of whom are fans of electronic music.

“A lot of synth players use pedals, but not a lot of pedals are built to their specifications,” Burton says. “So we built in the higher headroom for vintage synths, which have a higher output.

“Focusing on both the synthesis and guitar markets was really important to both of us,” he adds. “Even though we’re guitar players, we’re both into synths too. And in the same way, it was always important to us in designing these effects that they were going to be musical instruments in and of themselves, not just accessories—to have a sound that you can only get with this particular effect.” 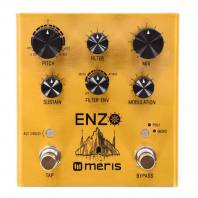 Meris Enzo
$299 | A guitar synth that can track mono or polyphonic parts, the Enzo also features a pitch-shifter, a deep filter section, a 2 tap delay, and ring modulation. It also works as a compressor or chorus in Dry mode.
1st tap: info, 2nd tap: video
Sweetwater 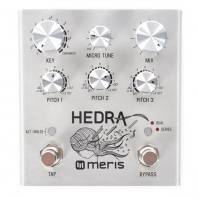 Meris Hedra
$299 - A 3-Voice Rhythmical Pitch-Shifter with tap tempo and deep functionality. Choose and micro-tune the key, and harmonize the fundamental with pitch-shifted notes going from -2 octaves all the way up to +2. Each voice can be delayed and fed back in 4 intricate matrices, through a smooth or hard step sweep through intervals, with the option to slide between pitches at the speed you choose.
1st tap: info, 2nd tap: video
Sweetwater 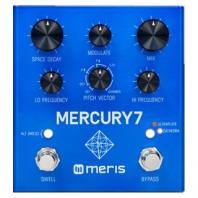 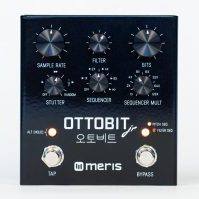 Meris Ottobit Jr.
$299 | A stereo “Audio In >> Video Game Out” device that lets guitarists employ synthesis techniques and bitcrushing to create new audio textures. Sample-rate and bit-reduction circuits are combined with tap tempo, LFOs, envelopes, a filter and both amplitude (AM) and frequency modulation (FM). It also features a sequencer and CV in.
1st tap: info, 2nd tap: video
Sweetwater 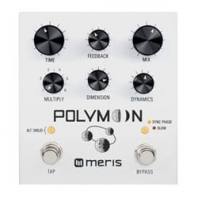 Meris Polymoon
$299 - A pedal inspired by the way Allan Holdsworth and Frank Zappa used delay: a multi-tap delay with tons of modulation—it has six LFOs in it. an extremely deep sound design that can take you from well known earthly environments to new shining sonic galaxies in seconds flat.
1st tap: info, 2nd tap: video
Sweetwater

Most recently, Meris has expanded its lineup with the Polymoon Delay, a pedal based on the multiple-delay rigs used by guitar virtuosos such as Allan Holdsworth and Frank Zappa.

Like their studio-quality kin, the Meris stompboxes feature 24-bit A/D and D/A converters, 32-bit floating-point DSP hardware and premium analog signal paths. They also have stereo outputs and MIDI in/out over TRS via the Expression jack.

Let’s take a look at the company’s lineup and see what it has planned for 2018.

The 440 Mic Pre recalls the warm, open tone of API’s much-loved 312 preamps, which have been a coveted piece of kit since they debuted in the early 1970s. Unique to the Meris module is an effect loop optimized for pristine audio.

“I wanted something to bring pedals into the pro-audio world,” Burton explains. “That was a good intro product for us, to get us on the map.”

The Meris module uses high-performance Cinemag input/output transformers for classic American tone, and the effect loop feeds pedals with the highest fidelity to ensure every ounce of sound is captured. Check it out in the video below.

The Ottobit 500-series unit straddles the worlds of guitar and synth gear, allowing guitarists to add sonic destruction to their tone.

“When Angelo came onboard, both he and I were listening to lots of chiptune and video-game music—retro-wave stuff,” Burton says. “The Ottobit came out of that stuff and our being inspired by it.”

Burton describes the Ottobit as an “Audio In >> Video Game Out” device that lets guitarists employ synthesis techniques and bitcrushing to create new audio textures. Originally found in digital synths, bitcrushing produces low-fidelity effects by reducing the resolution or bandwidth of the audio data. This results in quantization noise that can make the signal sound warmer at less-extreme levels and harsh when applied heavily. The Ottobit’s sample-rate and bit-reduction circuits are combined with tap tempo, LFOs, envelopes, and both amplitude modulation (AM) and frequency modulation (FM) to let you create sounds similar to those in video games.

The bitcrusher is also offered as the Ottobit Jr. pedal for guitar, bass and synth. “The pedal is quite a bit different from the 500 series,” Burton says. “All it takes from its older brother is the bitcrusher portion. Everything else is different. The 500 series is more LFO and trigger driven, and the pedal version is designed to do more pitch shifting, sequencing and guitar-stutter stuff. It’s more oriented toward live performance.”

The Ottobit Jr. also features a stereo output, a step sequencer and a low-pass filter. The sequencer is especially novel, allowing you to create Pitch, Filter and Sample Rate sequences of up to six steps. The pedal has controls for Sample Rate, Filter, Bits (to change bit depth), Stutter, Sequencer and Sequencer Multiply (which sets the sequencer speed as a multiple of the tap tempo). There’s also an Alt button that lets you access a deeper parameter function within each of the six controls.

Reverb has been done a hundred different ways, but Meris has carved out its own niche with the Mercury7 Reverb. Burton and Mazzocco were inspired by the Blade Runner score, which was composed by electronic music innovator Vangelis and makes extensive use of the Yamaha CS-80, an eight-voice polyphonic monster of a synth that is among the most sought-after vintage keyboards today.

“Angelo and I love Vangelis, we love Blade Runner, and we love the Yamaha CS-80,” Burton says. “So we decided to do the reverb part of that equation.”

Like the Ottobit, Mercury7 is also available in a pedal format. It includes everything in the 500-series unit along with stereo output, selectable true-bypass or analog-buffered bypass and an expression pedal input. The pedal has controls for Space Decay, Modulate (to set the overall mod rate of the reverb algorithm), Mix, Lo Frequency, Pitch Vector (to set the pitch interval of the reverberated signal) and Hi Frequency. As on the 500-series unit, there’s also the option of two reverbs: Ultraplate, a lush plate-style reverb with fast buildup; and Cathedra, a massive, ethereal and slow-building reverb. Like the Ottobit pedal, each of the Mercury7 pedal’s controls has an additional parameter available through the Alt function.

Exclusive to the Meris pedal line, the Polymoon Delay is a super-modulated delay inspired by cascaded rack gear. It’s capable of everything from simple delays to wildly modulated, pitch-shifted soundscapes, and its 1200ms of delay offer plenty of territory in which to let your imagination run wild. There’s even a built-in stereo “Barber Pole” phaser, with three settings available from a button on the pedal’s face: Slow, Sync (speed linked to a 1/4 note of delay time) and Slow + Sync (speed linked to a whole note of delay time).

“Angelo’s a big Allan Holdsworth fan and a huge Frank Zappa fan,” Burton says. “From an amalgamation of how they use the gear, we came up with the Polymoon concept, which takes several things and puts them in the same box. In the central part of it is a multi-tap delay with tons of modulation—it has six LFOs in it.

“The original concept was a super-modulated delay. Somebody like Holdsworth would have used a bunch of rack units. And then Zappa famously used the [MicMix] DynaFlanger. Angelo actually made a recreation of that for Dweezil [Zappa] a few years ago, and we actually had Frank’s original DynaFlanger in the office for a while, too. So the Polymoon can do that sort of dynamic flanging or a more traditional kind of LFO flanger, if you want.”

For all the complexity on tap, the pedal is extremely easy to use, thanks to its dedicated controls for Time, Feedback, Mix, Multiply, Dimension and Dynamics. Like the other pedals, it offers the deeper bank of Alt functions and has switches for tap tempo and bypass.

Despite their full features, all of the Meris pedals are relatively compact, measuring just 4 1/4 x 4 1/2 x 2 inches (W x L x H). “Yeah, we definitely, we squeezed a lot of stuff in there,” Burton says. “It was kind of a nightmare designing the circuit boards. They do a lot.”

New for 2018
“We have a few things in development that I can’t mention yet,” Burton says. Two that he can talk about are the new accessories Meris will debut at Winter NAMM 2018: a four-button preset switch that lets you instantly get to the first four of the 16 presets in the company’s pedals, and a box that gives full MIDI in and out for up to four pedals. “It’s handy for getting to the 16 presets and automating any parameters,” he says. “You can also save patches offline to create a whole library of them.”