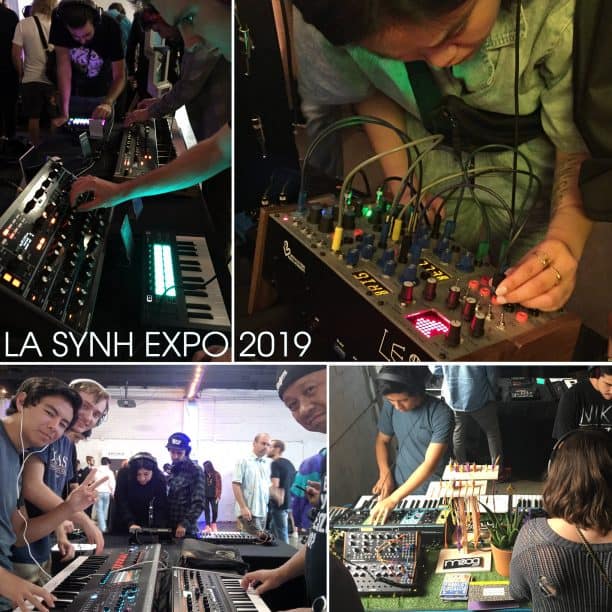 “Another great event. I’m impressed with how you attract such numbers of informed and engaged attendees. They know their stuff coming in.” – Matt IK Multimedia

“Overall the show was great. You had a great turnout of quality guests and I really enjoyed my time talking with everyone. The show did get pretty crowded […] I talked eurorack a ton with people who knew who I was, what we do, and how modular works. Bravo on that front as well! I think what you are doing is great. You got a ton of interested people in the door and I made quite a few sales which is awesome.” – Alex, WMD

“Very satisfied, it was a really good turnout, especially on Saturday, I did not bring any products but had a number of requests to buy them.” – Andrew, SSF

“The LA Synth Expo was great. I really appreciated the popup nature of this show – with the casual space, central location, and weekend schedule, it’s less of a burden than many other trade shows. I love that we can sell on-site, and we found that the show attracted a different audience than we normally get at shows. With two people at our table, we were both constantly busy showing off the Sensel Morph.” – Peter, Sensel

“We were overall satisfied with the turn out of the expo. Quite a lot of potential new customer interactions as they appeared to be at the expo for the pedals. Bit of a lull in the mornings but people started piling in rather quickly.” – Nate, Moog Music

“8/10! it was awesome, i love these events. Tons of traffic, well curated and genuine intrest from the event gooers. Felt good from start to finish.’ – Enrique, Novation

“Thanks for the whole event – it was very successful and we are pleased that ARTURIA was at the show.” – Ralph, Arturia

“The event was very successful for me and I loved how diverse the attendees were. It was a really diverse group of musicians across all genres of music, and it was a young crowd, which is totally my demographic. My sales at this event were excellent.” – Greg, Analog Cases

“The Expo was awesome!” – Charlie from Tangible Instruments

“The quality and quantity of the attendees was good. We were pleasantly surprised by the number of people who already knew about us and our gear. After that, most people who approached us knew something about synthesizers and were prospective customers.” – Aaron, 1010 Music

“We were extremely happy with everything and want to help make it even bigger next year. Great turnout btw! Customers were friendly. Nothing was stolen from our booth. The people who came were focused- i.e. most of them knew what they were looking at, not like a bunch of random NAMM people asking dumb questions.” – Shawn, Analogue Haven

“The event was very successful, lots of foot traffic the whole way through. Everyone was really enthusiastic about the products and learning about eurorack synths. It was nice to meet people who were interested in exploring a new type of instrument.” – Alexandra, LA Circuits

“Good show, we didn’t do direct sales but we feel like we influenced some purchasing decisions” – Yamaha rep

“Very happy to be involved with the event this year. There was plenty of traffic and opportunities to connect with people to justify being there. Organization and execution seemed good to me. We were brought in last minute via Shawn so there was a little rush in the way but overall very good.” – Blake, Noisebug

“Overall, I am happy with the event. Attendance was good and seemed busier overall than Synthplex.” – Rob from Rosen Audio

“I was very satisfied with the location and vibe. I thought there could have been more press to cover the event. There was a solid amount of people.” Henry from Strange Electronic 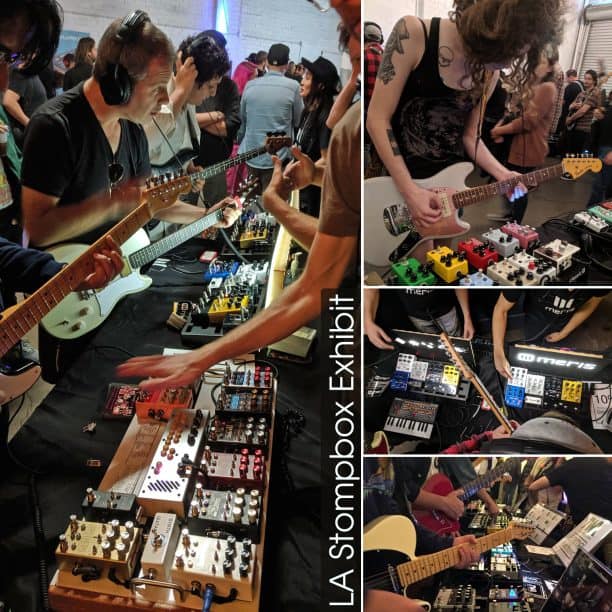 Here below are some excerpts of the feedback given by vendors about the 2019 LA Pedal & Synth Expo. You can read feedback by the attendees here and here, and see pictures here and here.

“This year was exceptionally better than last year in terms of traffic, end-users making purchases and overall engagement. That venue is great.” – Joey from Dunlop

“The event was great! Traffic was good, we sold a bunch of stuff, lots of fun!” – Noah from Death by Audio

“The event was one of the best. Felt like a party. Traffic was steady and attendees were serious. And having fun.” – Randy from Teisco/Mono

“I was very pleased with the turnout at this year’s event. I was actually surprised at how busy it got, but I would expect that of a music event in Los Angeles. We did sell a few products, so thank you for having a dealer on site to take care of sales.” – Joe from Eventide

“Traffic was steady and constant on Saturday. Vibe was chill tho which we liked. Good airflow. Attentive management by Paolo. It was good to have Truetone there to help sell gear.” – Jinna from Meris

“The event was awesome and we look forward to participating again in the future!” – Sunir, Truetone Music

“Very happy with traffic at show, especially Saturday. Sales were fine, I sold 3 pedals. The public was VERY HAPPY and feel like this is an incredible opportunity to come out and play with gear. Several people said they were looking forward to this show all month. – Yosef, ACLAM / Massive FX

“Great attendance and customer interaction. Much better than 2018, consider us confirmed for 2020. Did quite well with NuX.” – Michael, MJP Sales/NuX

“We were happy with it overall. Very happy I had some space close by to store sale inventory, sold some items. Traffic seemed good and the venue had more space than Brooklyn for people to move between vendors.” – Tony, Voodoo Lab

“I was happy with the event, LA seems like a good location traffic-wise.” – Sylvie, Red Panda

“I think it’s a great event. Nice to see a community excited about pedals. Met some cool people. To improve, can’t really think of anything. Usually I have a lot of opinions. But not this time.” – Paul, Ex Gear

“I thought the show went very well. I don’t really have any suggestions on improving the experience. I feel like you have a good thing going.” – Tom from TWA and Emma Electronics